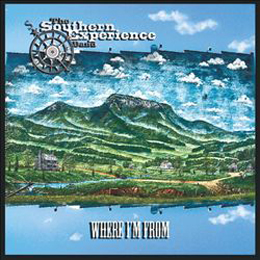 This fairly young North Carolina based Southern Rock quartet consisting of lead singer/ guitarist/ keyboardist Scott Sanders, lead guitarist/ backing singer JT Fitch, bassist/ backing singer Ron Humphries and drummer/ backing singer Jon Humphries (and the “young” also relates to the members, except for the bassist, who's obviously older, judging from the photographs in the album's booklet) first let themselves be heard of on a wider scale than just the live gigs through the release of their debut EP Beginnings in the year 2011.

Not that the live gigs didn't already cover quite some area, the band having played from Columbia, South Carolina to Nashville, Tennessee, and everywhere in between, and also put in appearances at festivals in both North and South Carolina (The Art Of Sound Music Festival, The Fabulous 4th Festival, the Extreme Makeover Home Edition Wrap Party, King Mountain Fire Department's annual BBQ Festival). According to our info, the band has an almost 100% call back rate, proof enough that the people want to get more of this band.

So, up the ante it went, and the band set forth to record this, their debut full-length, at Inman, SC's Mill Street Recording Studio with the help of guesting musician Paul Hornsby (additional piano and organ on the tracks “Fight The Fight”, “Take It Slow”, and “You And Me”) and backing singers Deanna Humphries and Megan Johnson under supervision of recording engineer/ producer Tim Lawter, known as a member of the Marshal Tucker Band. Mastering, by the way, was done by Rusty Milner, also of Marshal Tucker Band! And with a team like that, you know you're gonna get a truly good sound, right? Correct!

Of course, you don't get anywhere without good music...and The SE Band sure deliver! Great Bluesey Hard Rock tunes with that typical Southern flavouring which has made more band popular worldwide, and a touch of Soul in some of the somewhat calmer tracks thanks to added organ sounds. Hey...if you think I'm pulling your legs about the Soul thing, it so happens the guys also cover Stevie Wonder's “Superstition”, so...just goes to show you, eh? But overall what you get is your “normal” Southern Rock with nice catchy guitar melodies and of course the added guitar solo. Sanders' voice also goes typically well for the genre, and the occasional harmonic backings he gets increase a certain sing-along factor (to my personal taste, those backings might even have been a little more frequent – didn't hear the girls that much either!).

Of course, The SE Band are no match for the more established acts in the genre...yet...but if you're into Southern Rock, and unwilling to wait until one of those “bigger” bands come along with a new album again, then The SE Band should be more than a welcome thing. To get acquainted with the band, check what audio/ video you can find by surfing to their website (www.) southernexperienceband.com (they also have pages on ReverbNation, facebook, and twitter)!