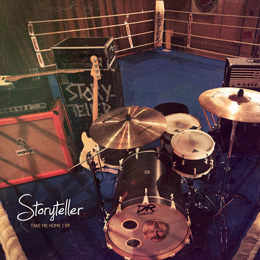 While the German guys in Storyteller are just about to blow out their very first birthday candle, they release there very first record, containing three songs, called Take Me Home.
When you look at the cover, you might think Storyteller is some kind of new songwriter's project, but as soon as you listen to opening track Memory Shot, it's quite clear that it's a happy-sounding pop punk band. Memory Shot is a real earworm and has everything a good pop punk song needs. Immediately, you feel like it's Summer while enjoying a cold beer or soda by a pool surrounded by coconut trees. The second track, which is the title track, sounds totally different and is even catchier than the previous one. The vocal parts of Rico Opitz are the most remarkable thing about Storyteller.

Storyteller definitely is a band to keep an eye out for, because their sound could reach many fans inside and outside the hardcore and pop punk scene. For fans of A Day To Remember, The Wonder Years and The Story So Far.