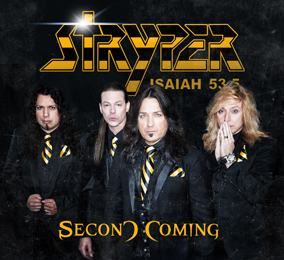 Stryper  reunited in 2005, and haven’t released that many albums since their reunion.  This album ‘Second coming’ also cannot really be called a new release, since it contains only two new tracks and 14 old songs, that have been re-recorded.

I must admit that these re-recorded versions seem to sound better then the original versions, in having a sound that’s much fuller, greasier than the originals.  Of course it also helps that the ravages of time seem to have had no influence whatsoever on Michael Sweet’s vocals.  What also has greatly improved versus the originals is the bass, that seemed almost absent in some of the older songs.

If you’ve not heard work of this, one of the best known Christian bands from the eighties, and one of the few you could find albums from over here in Europe, then you might give this a try.  It’s old wine in new sacks, but for once the quality has greatly improved.  And now start working on some new material guys.