Tear Out The Heart 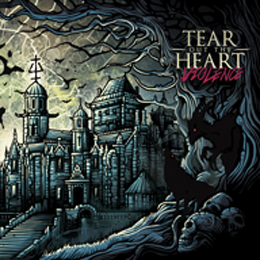 With the release of Violence by Tear Out The Heart from Saint Louis, USA, Victory Records returns to what they were doing seven or eight years ago: releasing the most valuable American hardcore and metalcore records. Just think of the early years of A Day To Remember. The label really set that band on their way for world domination.
Tear Out The Heart combines sinister vocals with elements of both hardcore and metal. The opening song, Dead By Down, is a real rager that sets the tone for the rest of the album. Violence turns out to be a very dark record. Songs as Infamous Last Words and Feed Me A Stray Cat are a perfect example of that. Perhaps the contribution of Attack Attack vocalist, Caleb Shomo, had something to do with that. Next to his contribution on the song Undead Anthem, there is an even bigger singer doing some guest vocals on the record. No one else than Story Of The Year's very own Dan Marsala volunteered to do some vocal parts on Coffin Eyes.

As the guys in Tear Out The Heart are still very young, you wouldn't have to be surprised if you see them breaking plates around the world in the near future. Fans of The Devil Wears Prada will definitely like Violence. Bring back doomsday!