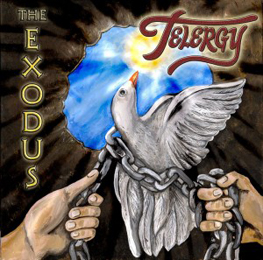 This conceptual album tells the tale of the Jewish people's exodus from Egypt, in a somewhat peculiar way.

It all starts with a spoken word passage in which a grandma and grandson go up the attic to do some cleaning up, and start off by finding an old record player. Youngsters being what the are these days, the kid of course never such a music-producing instrument, and do illustrate the works of it, Grandma puts on one of her favorite vinyl singles...heck, from the sound on it it may even have been one of those older bakelite discs, which still ran on 78 rpm! The song being the old negro-spiritual lament “Go Down Moses”, the kid is intrigued by the sadness that exhudes from it, and asks his Grandma what it's all about.

What follows is an album in which instrumental and movie soundtrack-ish tracks (voice-over actors bringing several parts) are alternated with more narrated parts (between Grandma & Grandson), and the story of the Exodus of  the Jewish people enfolds, ending when the Hebrews finally come upon the Promised Land after leaving Moses behind in the desert to die after leading his people through the desert for 40 years or so. Stylistically, the music is primarily a very picturesque Symphonic and Progressive Rock and Metal, with some momentary diversions into the heavier kinds of Metal.

Now, in essence, Telergy is not a real band, but rather the one-man project of one Robert McClung, whom invited several people to participate to both the vocal (a total of 9 actors and voice-over actors, one even from Israel) and the musical part of the album [2 violinists (one from Hong Kong), 2 cellists, one flutist, one keyboardist (from Haiti), and one didgeridoo player (from Australia)] to contribute to various parts of the album, which lasts over an hour! McClung now, ain't no newcomer! In fact, he had been successfully active for almost two decades, recording and touring with acts as diverse as The Commitments, 202 The Band, Nine Shades Of White, the Makem Brothers and T.J. Wheeler, when in 2009 he decided to abandon that world of “popular” music to dedicate himself to the music he loved so much in his teenager youth, namely Progressive Rock. The influences are clear : Pink Floyd (he even uses an adaptation of “Is There Anybody Out There” for a passage on the album), Rush, Kansas, Dream Theater, Trans-Siberian Orchestra, Nightwish, Kamelot, Within Temptation, Symphony X, Rhapsody Of Fire, and numerous others, but when listening to the album you'll find yourself being reminisced to the above in the first place! Not that there's any copy-catting here, you know! Besides the main characters of the Grandma and Grandson, and the “spoken word” artists in the soundtrack-ish passages the album benefits a lot from a couple of passages where McClung used actual singers, whom add a classical touch to those parts!

Meanwhile, while Telergy still isn't a band, McClung's group of collaborators has expanded even more with additional instrumentalists and singers from New England (McClung's home state in the US) and beyond...and somewhere on his want-list, is the desire to one day be able to bring this music in live conditions on a stage. Great stuff this, and knowing he's decided to focus on certain historical events, I wonder which theme McClung may use for his next album. I'm certainly looking forward to a next release! Oh, before I forget, you can check out some music (samples), as well as more background info, of the album at (www) telergymusic.com.