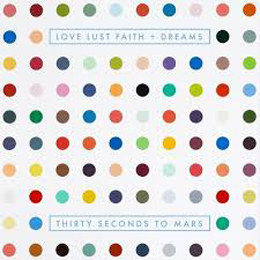 At first, people didn't really want to take Thirty Seconds To Mars from Los Angeles seriously, just because they had the actor, Jared Leto, behind the microphone. So lots of people thought that success would come without any effort. Those people quickly changed their opinion when the band proved to make rock music like it had never been heard before. The Kill was their breakthrough song, but after that, many more followed.
Love Lust Faith + Dreams is their fourth studio album. The record starts with the intro song, Birth and it kicks in with an entire orchestra, which brings back the theatrical aspect to the band's sound. Up In The Air was chosen as the first single to promote the album, which is a good choice. The track will be liked by both rock and dance fans.
The biggest difference between Love Lust Faith + Dreams and the previous record, This Is War, is that this one isn't as dark in both lyrics and music. In the song City Of Angels for instance, they sing about how much they love the city they grew up in. No hate, no war this time, but just plain happiness.

Thirty Seconds To Mars succeeded to create a new masterpiece with Love Lust Faith + Dreams. Don't miss them at Rock Werchter in the beginning of July.