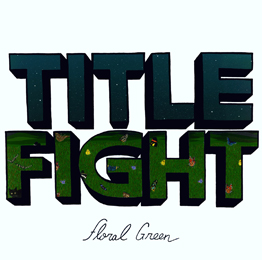 Wilkes-Barre, Pennsylvania has always been the breeding ground for many hardcore punk bands. Just think of Cold World, Stick Together, Dead End Path and many others. After some European tours, an American tour supporting Rise Against and countless shows across the American nation, Title Fight released their third full-length, called Floral Green.
The record immediately kicks in with Numb, But I Still Feel It, which completely represents what Title Fight is all about. The difference between this record and the previous two is that, never before, they put so much emotion in their songs as they have done on this one. Songs as Leaf, Secret Society and Sympathy stick to your mind. With Head In The Ceiling Fan, they take back some speed and when you close your eyes, you can only think of the warmth of Summer, while sitting next to a lake in the middle of a forest.

Floral Green is by far the best record released in 2012 for me personally. Title Fight might just be that next big thing in the hardcore punk genre.