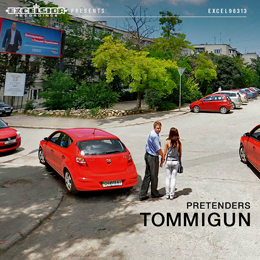 With Pretenders, Brussels based Tommigun returns with a new batch of their “heartbreak hangover tunes”!

Following the release of their debut album Come Watch Me Disappear (review by yours truly posted 30/05/2010 still available in this website's “Archive” section), the band went on a European tour as support for Daniel Johnston, and then toured through Belgium and Holland with Balthazar and Amatorski, among others. The album was then also released in Germany and Switzerland, which resulted in invitations for club and festival shows. In 2012, they not only again toured as supports for Daniel Johnston, but were also hired by the latter to function as his own band. Somewhere sometime there, they also made their own version of the soundtrack of Marc Didden's 1983 movie Brussels By Night (music originally composed by the revered Raymond van het Groenenwoud).

The new album was recorded “live” at the La Patrie studio of Koen Gisen (see An Pierlé, the Bony King Of Nowhere, Kiss The Anus Of A Black Cat, Flying Horsemen), whom (so tells the info) provided a coherent and threatening sound. A threat which seems to come from a forceful bass and drum play...which will entice people to listen to the album song after song. Opening the album in the most grand of ways, is the exhilarating “Gun”...as far as I am concerned, the most compellingly catchy tune I have heard from the band! Every element of the band, the organ, guitar, bass, drums, but even more so the going together of the male and female voice, falls together into a...nay, thé perfect heartbreak hangover song! Luckily, the intensity of the song is diminished toward the ending, or the ensuing dreamy “Harvey Balloon” would've been out of place. As things are, however, this piano based tune is just proof of the band's versatility within ins own genre. What follows are more tunes about people who, confronted with their deplorable love situations, feel compelled to make things even worse. I would have to admit, straight up, that I am quickly becoming a huge fan of Kaat Arnaert's vocal stylings. At moments “merely” melancholic (in a masterly way), she can bend her voice to sound like a cat in heat, and make the listener love it! Yeah, she definitely adds an exotic touch to the material. Among that material, two covers! First, a very nice cover of Nina Simone's perhaps lesser known “Fodder On Her Wings”. Not surprisingly, it's the female lead vocals which màke this version (she's given an extra chance to front center the stage with the frail “Crazy Darling”)! Second cover is of “Sun On My Face”, originally by lead singer/ guitarist and Tommigun co-founder (see also review of debut album) Thomas Devos' former band Rumplestichkin.

To find music by the band on the Internet, you would have to go to either their facebook page, or to (www.) myspace.com/tommigunmusic. But what's available there can only give you an appropriate idea of the new album, as no material of it is featured there. So, in order to get a whiff of the new stuff, you will have to look up the album's page on one of your trusted online sales websites (Amazon, iTunes ….) for the 30-second samples usually provided.