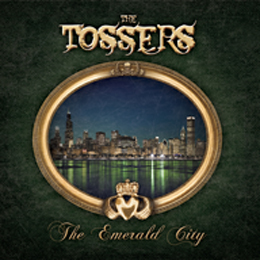 Just before 2013's Saint Patrick's day, the most important Irish holiday, The Tossers step forward with the release of their eight studio album, The Emerald City, referring to their hometown, Chicago. It's no doubt that they both love their roots in Ireland and their current home. They're very clear about that as the fifth song on the record is simply called USA and immediately after that, we have the track simply called Saint Patrick's Day.
After twenty years, there music sounds lighter and tighter than ever before. The Tossers are known for their authentic use of traditional Irish folk instruments such as the fiddle, the mandolin, banjo and thin whistle. The title track is the best proof of that. With Wherever You Go and Where The Beer And Whiskey Flow, they go back to the pub as it is a real drinking song. Wherever You Go is much more modest than most of the other songs, but it definitely is as strong.

Everyone who is well-known with the music of The Tossers should add The Emerald City to their folk punk collection. For those who haven't been convinced yet, but are totally into Flogging Molly and Dropkick Murphys, they will be missing out on something wonderful if they don't get it now. The one and only Saint Patrick's Day soundtrack of 2013!