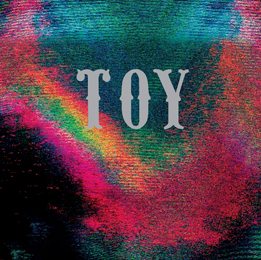 Having heard rumors about Belgian Pop Rock act Toy (released albums, now classics in the genre, in 1979 and 1981, both in my possession) working on a comeback album (as a follow-up to the release of the 2012 single “Walking Backwards”), I kinda mistook this London based band's debut album for that. A deception which lasted as long as the time between my editor-in-chief's handing the info-lacking download, to the first minute I was listening to the CD when I got home from an afternoon of work at ConcreteWeb's headquarters.

The British Toy is not only much younger, but also plays a completely different style of music, namely a calmer Shoegaze with elements of Psychedelic Rock, Krautrock, and Neo-Psychedelica. The band came into being in 2010 when former Joe Lean & The Jing Jang Jong members Tom Dougall (vocals/ guitar; apparently the younger brother of The Pipettes' Rose Elinor Dougall), Dominic O'Dair (guitar) and Maxim Barron (bass) enlisted the services of Spanish keyboard player Alejandra Diez and drummer Charlie Salvidge. Toy (UK) did its first live performance in January 2011, and then things happened really fast. That summer they already played at some festivals, in Autumn they were on tour supporting The Horrors, and before the end of the year, Heavenly Recordings had released the band's debut single Left Myself Behind (originally issued on a 100 copy rotation, it was sold out in a month, and re-released in January 2012). January 2012 found the band featured in NME's list of “100 New Bands You Should Have To Hear”. Second single Motoring (again with exclusive tracks, by the way) was issued in April 2012. Prior to the album's release, singles were issued for the songs “Dead & Gone” (backside featuring an Andrew Weatherall remix) and “Lose My Way” (backed by exclusive track “Bright White Shimmering Sun”).

Recorded in early 2012 with producer Dan Carey, the band's eponymous album was received warmly by the critics. October found the band out on a UK headline tour in support of the album. The band has played several UK dates since, and is just finishing another tour this end of March 2013. For those interested, some future dates are already posted at the band's facebook page (www.) facebook.com/toy.band (and also on their own website). An upcoming European tour will even see the band come play at Belgium's Absolutely Free Festival 2013, in Gent, early August. But perhaps you'd better give the band's music a listen first, just in case their brand of Shoegazer is not quite your thing? Check the “Music” and “Video” sections at (www.) toy-band.com, and enjoy yourselves (seeing as you read on thus far, you mùst have at least a general interest in Shoegazer, so it's not really likely you'll put Toy's music down!).