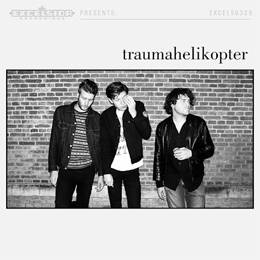 Youth of today...they can be a weird lot: give 'em half a chance an they'll be putting down their parents' experiences down as negligible facts...but when music comes into play, some of the dudes will hark back to days of yore and identify with specific genres of “back when”! Which is quite alright, because you know, a funny thing about music, especially when we're talking “Rock” music, is that in due time certain sub-genres will come back for a while.

From the North of Holland (Groningen), Mark Lada and Daan van Dalen got together on a such mutual musical kinship (which was also coupled to a certain destructive look at everyday life), and they promptly declared themselves Friends For Ever, after discovering the contents of each other's albums cabinet kinda covered the complete Rock 'n' Roll history, from obscure Country, Blues, Rhythm & Blues, and Beat to Punk, Wave, Grunge and contemporary Garage, and it was therefore inevitable that they would endeavour to make their own brand of Rawk Rock 'n' Roll, era late mid-sixties, when the likes of Roky Erickson and George Thorogood (with or without his Destroyers), or even Blue Cheer, were among the roughest Rock bands around (on their facebook page, the band cites influences from Killed By Death, Pontiac Trans Sport, and Little Richard). After some initial rehearsing, the duo happenstanced across Roel van Merlot (Professional Against) from the other side of the country, namely Eindhoven...but he turned out to be the ultimate addition which would re-mould the duo to the iconic trinity of drums, guitar...and guitar!

With the above musical influences (and the way I already prepared the intro), it shouldn't be a surprise to find this band playing their asses off on venues both national and outside the confines of the Dutch borders. Eventually they entered the studio with Frans Hagenaars, and within a week Traumahelikopter was recorded. According to Lada, “The album is about flat hedonism, Punk, and broken teen spirits, and is definitely the best we recorded so far!” I can confirm the first part of that statement, but have no way of knowing about the second part (the recording quality). As far as I know, the album was only preceded by the pre-album single Kids (released Dec. 2nd of last on 7-inch vinyl, and containing the non-album track “Bad Day” as its b-side. For a taster of Traumahelikopter music, check out the band's page on bandcamp (complete album posted for pre-listen). At (http://) soundcloud.com/traumahelikopter, you get the opportunity to listen to another non-album track entitled “Maze City”.