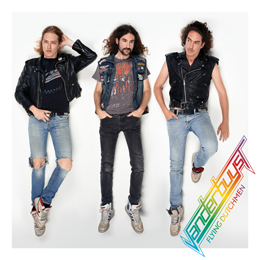 There’s three dutchmen flying through my speakers as we speak and you best clear a path for Barry van Esbroek – drums, Willem Verbuyst – guitars and Jochem Jonkman - vocals, bass.

Vanderbuyst has been hyped up in the Dutch soil as of late, so I sort of wanted to find out what´s this all fuzz around them. Their entire motif is based on writing simple, catchy songs that are easy to party along with. It overflows with all the best elements from the ‘70s/ ‘80s hard rock era. The sound is somewhat similar to guitar work and groove on Sabbath/ UFO’s Mob Rules/ Phenomenon-albums with Led Zeppelin, very early Scorpions, Rainbow and even Vandenberg hints and shading, keep the rock star attitude and volume on eleven while giving the old three chord rock formula a turn on that you can swing, screw or fight to and never regret having done one over the other. Vanderbuyst puts 110% into every song and that effort comes through your speakers as pure energy.

My personal favourites are ”Tears won’t rinse” “Lecherous” and “In dutch” but this is one of those albums where you can pretty much take your pick and be satisfied.