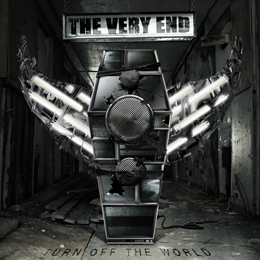 The Very End is a trash metal band from Germany.  Now a you might already know trash is not really my favorite cup of tea. But let’s not jump to conclusions, and give this album a fair chance.

Trash metal not being my favorite, it’s no small wonder I’d never heard of this band before.  Yet this is already their third album so far. But as far as I could tell they haven’t had much attention so far, and for that reason stayed quite obscure. I did find out that they’ve had their fair deal of line-up changes so far.

Now upon listening to this album it reminded me of years gone by, when the first Anthrax and Slayer albums were released.  And just like in those days, on this albums there are tracks I like, and tracks I don’t like.  Being a fan of NWOBHM, besides many other rock genres, what put me off a bit where the shouts and grunts.  Notwithstanding this minor flaw, musically this is a very good album, wrought out of the best steel the Ruhr region, a major industrial region for Germany, known amongst other factories for their steel and iron factories. Which is no wonder since this is the region where this band comes from.

Best songs on this album were, maybe not that surprising for me, ‘Maelstrom Calling’, which is the slowest track on the album.  But I’d say just judge for yourself.