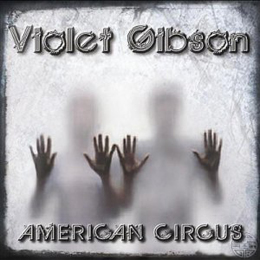 In 2007, when Michelangelo and Tony hooked up to work together, the band, Violet Gibson, was born. but under a different name at the time . After an intense writing phase, the two of them, along with singer Matteo Brozzi they brought life this group’s first Demo when they were originally called Last Vegas.

The Demo was distributed in various underground venues, where they performed live, with success. When the band decided to begin writing the material for its first record, it experienced two major changes: the group’s musicians, with guitarists Gabriele Tassara and Giovanni Marchi joining and then its name change to Violet Gibson. It took almost 1 year for the writing and recording of the record . The named the record American Circus and was recorded at Studio 73 (Extrema, At the Soundawn, The Hormonauts), mixed at MB Studios by Mike Bettali and then mastered at Studio 73 with Riccardo “Paso” Pasini’s supervision.

At first i wasn't really convinced about their album witch is out for a good month and a bit. To be honest they start of with a couple of not so interesting songs. Nothing i could actually pin exactly on them what’s wrong with about them, they just don't have that certain thing to make them special. But after those first few songs it does get better and better. Ok here and there the lyrics are a bit for the "soft at heart" if you know what i mean, but music wise these guys know what they are doing. Rock songs make way time from time for acoustic songs. Yes these guys keep it variated and interesting (except those first few songs).