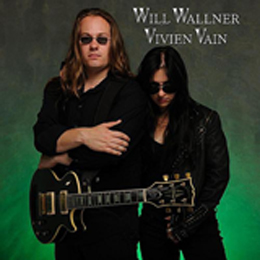 I'm not sure about the time-line on this...duo...I mean, when exactly they met in Los Angeles, but both guitarist Will Wallner and singer Vivien Vain originate from Europe.

Vivien comes from an island named Mali Losinj, off the coast of Croatia (situated some 135 km from Trieste in a birds' flight, in a SSW direction), and prior to moving to LA, not only got involved with several tribute bands, but also worked with several producers on mainland Croatia. Since moving to the States, she developed her song writing skills (most of the songs on the Wallner/Vain album are of her hand) and collaborated with several musicians. Hence, once she got together with Wallner and came up with the Wallner/Vain concept, she secured the services of several renowned musicians for guest roles on the album, these including keyboardist Tony Carey of Rainbow repute, whom at first she convinced to contribute to 3 tracks (2 of which, namely album opener “The Dream”, and “Rising”, he was also asked to write intros for) and then got to do another, pairing him to bassist Jimmy Bain on the track “Dreamstealer” (actually the first song written for the album). She also enlisted the services of mixing engineer Gary Tole, after having heard his talent on the Joe Lynn Turner solo albums.

Will is a guitarist from England, where he got a degree in music engineering at University Of Porthsmouth. He then moved to the US to study at Hollywood, California's Musicians Institute. Influenced by the likes of Richie Blackmore, John Sykes, Gary Moore and Eddie Van Halen, he is a session and touring musician, and in the latter position he was seen in bands opening for W.A.S.P., L.A. Guns, Michael Schenker Group, Y & T, Steel Panther, George Lynch, Loudness, Joey Belladonna (ex-Anthrax), and many more. Recently, he joined Earache Records recording artists White Wizard (already toured with 'em and recorded guitar solos for their upcoming album The Devil's Cut).

Back to more of the renowned people Vivien secured for the album, starting with drummer Carmine Appice (of Vanilla Fudge and Ted Nugent fame, to name but a couple of the list of bands he played for during his career) whom played on 3 tracks, one of 'em (“Streets Of Rage”) finding him paired for the first time with drummer Vinnie Appice (known from Dio, Black Sabbath, and Heaven & Hell, among others), whom also plays on 3 other tracks. On one more track (“Soul Monster”, also the track where Vivien hands over the microphone to Will), drum duties were secured for Brian Tichy (you know him from his work with Whitesnake, Billy Idol and Ozzy Osbourne, among others). On the bass then, besides the aforementioned Jimmy Bain, we find Tony Franklin (of Roy Harper, Jimmy Page and Tony MacAlpine repute) on 4 tracks and Rudy Sarzo (Quiet Riot, Ozzy Osbourne, Whitesnake, etc...) on two. An additional guest on keyboards, also for the track “Soul Monster” was found in Derek Sherinian (Dream Theater, Alice Cooper, Clack County Communion, Kiss, and also a solo artist). For the different line-ups, per song, check the “Song Comments” at the band's own site (www.) wallnervain.com. For music off the album, you'll have to make due with samples found at the band's facebook (better find the album's page on Amazon or one of the other online sales stores, as they usually give samples with all songs!).

Stylistically, Wallner/Vain brings the type of Heavy Hard Rock you might expect, with the musicians involved, occasionally going more into the Classic Hard Rock of Rainbow's Rainbow Rising days, and heading for a more straight-forward Heavy Rock approach on others. Great stuff, if you're into the heavier Hard Rock of the '80s and '70s! Oh, before I forget to mention : when I got the album for review at the end of last Summer, news was already out that the album was going to be released on Polish quality label Metal Mind Productions in October 2012. Meanwhile, it transpired that the label gave the album a new cover art, and the title of Rising (after one of the songs).