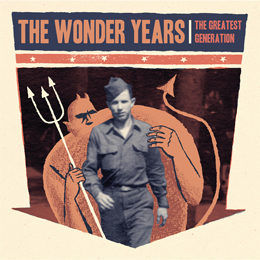 The Wonder Years from Philadelphia is a pop punk-based sextet who made it from their very own basement to the big stages such as Warped Tour.
The Greatest Generation already is their fourth album in six years of making music and embodies everything the band stands for. The Wonder Years always try to insert personal facts in their lyrics and again they managed to do so. Not only the lyrics are on a higher level than previous record, Suburbia: I've Given You All And Now I'm Nothing, but all songs just blow the masterpiece from two years ago away. They've managed to eliminate all the faults (as if there were any) and produced perhaps one of the best records in the pop punk genre of the past decade. The second track, Passing Through A Screen Door, acts as a turning point between the previous full length and the new work. All songs after this one, introduce The Wonder Years as a band that's really on top of its game.

Everybody who's into rock music, from metal to emo, should give The Greatest Generation a listen, because The Wonder Years really prove that they are the greatest.