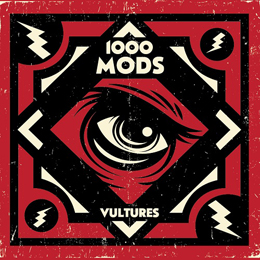 When looking for info on any specific band, it's always better to check out different sources, as some may contradict each other, or simply lack the info needed to make a full picture. Failing better explanations, I'll assume that this originally Chiliomodi based (should be in the Korinthia/ Peloponnese region) band was originally founded in 2005, but was either known under a different name at that time, or re-invented itself (that possibly involving a line-up change) in the 2006 Summer. For sure is, that since then the band gained a reputation for using vintage equipment, giving their Stoner Rock/ Metal sound the most honest approach!

Again depending upon the info source, the band self-released its debut 5-track demo-CD Black Reality in 2006, or in 2007 (I'm inclined to believe the second, the info source being the band's page on facebook!), and went on to release their debut 7-inch Liquid Sleep thru' Suisound Productions in 2009. The following year not only saw the band share a tape cassette with Wight (entitled 1000Mods Vs. Wight, and released through the Fat & Holy imprint), but also find none less than Billy Henderson traveling to Greece in October, to produce the band's debut full-length album Super Van Vacation, which was released through Kozmik Artifactz on both CD and double 12-inch LP in early 2011 (with a re-issued performed by distributor CTS in 2013 – artwork of the album was by the famed Maleus Rock Art Lab, which has been responsible in the past for adorning a multitude of album covers in the Stoner genre)! The debut album was followed-up by the band's first release through  The Lab Records, in the form of the 2012 Valley Of Sand EP (issued both on CD and 12-inch vinyl).

Over the years the band, which is now based in Athens, has had the opportunity to play support slots for some of the bigger bands in the genre, these including Brant Bjork, Colour Haze, Graveyard, and Karma To Burn, and in order to promote their debut full-length the band (current line-up consisting of Dani G on bass and vocals, Giannis S and George T on the guitars, and Labros G on drums) toured outside their home turf for the first time, playing 40 shows in 15 countries, including performances at such infamous festivals as Desertfest, Up In Smoke 3, Rockwave, and Lake On Fire.

Not surprisingly, influences cited by the band include (sic) “Black Sabbath, Kyuss, Acrimony, Colour Haze, MC5, etc...”, and their eventual sound is actually closer to the Rock side of Stoner. Recorded and mixed by producer George Leodis in March of last, the album includes a guest performance on Hammond B3 organ by Greg Chour, on the track “Modesty”, and have included a sample of “sage words” by Carl Sagan in the introductory notes of album closer “Reverb Of The New World”. To listen to some of the band's music, surf to the band's own (www.) 1000Mods.com, which will automatically re-direct you to the album's page on Bandcamp, and where the band also posted their three other most recent releases! What you'll discover, is a band which, stylistically seen, adds nothing more to the Stoner Rock genre...but also a band which complies to the most rigid of high-class norms within their scene...a band whose songs may in 10 years be seen as genre classics!