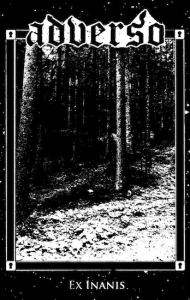 I can’t say much about this Portuguese band – who are they (or is it a one-man army), where do they (he / she) come from, what’s the story behind the project, and so on. The only thing I know is that Adverso did release a first demo (on tape), called Bringer Of Death, at the very end on 2017 via Purodium Rekords (also from Portugal’s black-scorched soil), and this very same label recently released the sophomore demo-tape, Ex Inanis (which is Latin for ‘from the void’, or ‘from emptiness’). It comes in an edition of 80 hand-numbered copies on cassette, with striking cover artwork (which immediately gives you a clue what this stuff is all about: poppy Hip-Hop indeed… Not!). Ex Inanis consists of four tracks, repeated on the B-side, by the way, clocking about twenty-two minutes.

Powerfully strengthened by a sick, rotten sound quality, Ex Inanis exposes a filthy, dirty, raw and grim form of old styled ‘Orthodox’ Black Metal with a very deadly and negative attitude; negativity in a quasi-emotional manner indeed. The songs are ‘full’ in performance, created from a concrete web, eh, I mean a concrete wall. The monumental compositions are melodic for sure, but from an epic point of view rather than meant as a guitar-oriented recording. This is such an example of what a perfect equilibrium of instruments must be: lead and rhythm guitars, basses, drums and vocals are all as important to create the final result. The mix therefor has been done with eye for detail. Okay, there is a certain background noise going on, for this stuff stands miles away from a clinically-justified production, but it does not bother (me).

Anyway, the main tempo is quite speed-up, adding an unstoppable energy into the whole story. The raging drum patterns strengthen that dynamic aggression of play. Some excerpts are slower, from mid- to up-tempo (oh, I do adore the opening sequence of Desiderium, for example…), but these fragments too are full of energy and power. And seen the variation in speed, there is no chance for irritation because of exaggeration. The riff-laden compositions also exhale a certain darkness, a morbid and somewhat astral-occult form of abyssal darkness. One time, it’s like a blitz-eruption, showing a legion marching forward for victory, then again it represents a victorious elegance after some battle was won. This duality, the lust for war and the glory afterwards, gets even translated by the highly varying drum patterns: sometimes hammering like an artillery attack, then again militant and proud, painting an own landscape of superiority.