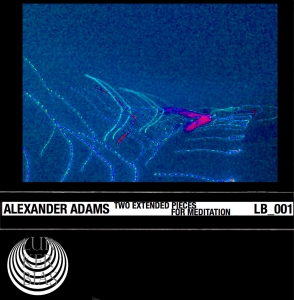 I was quite surprised when I listened to this release, and this for a couple of reasons: the length and the label involved. Actually, the label, Lurker Bias, is a very young but highly productive label from the Chicago area. They are specialised in most kinds of Noise and Extreme Experimental Music in general (Jazz-influenced madness, for example), and especially when it comes to Noise Wall and Harsh Noise, this label must be a recommendation for this sick / sickened / sickening scene. But the label also houses some bands and projects that are quite different, like within the Psychedelic Rock scene – though this is extremely limited; as said before: Harsh Noise is the core business.

…which brings me to my surprises about this release, Two Extended Pieces For Meditation by Alexander Adams. At first, as said, it’s the length that catches attention. Like the title says, this release consists of two compositions that are quite extended: both pieces clock over an hour each, with a total running time of 125 minutes. It needs endurance and courage to start but, especially, to go on throughout this aural journey, but it might be appropriate to do so, for you might enjoy it.

The other ‘concern’ was (is) the style performed. Alexander Adams does not create violent Power-Electronics influenced Harsh Noise, yet a rather nihilistic form of Arctic-cold and ominous Ambient / Drone soundwaves. The first composition out of two reveals a dreamlike and ultimately nihilistic approach on low-frequented Drone pulses and primal sound rhythms – like an organic collage of extended aural fragments from an upcoming, empty-spaced dimension. The ‘meditative’ aspects, like the title suggest, is little disturbing, for this piece isn’t actually of the relaxing kind, yet rather oppressive and even asphyxiating. But hey, who am I to complain?... Actually, this sonic experience goes deep, abyssal-deep, into the hidden levels of the subconsciousness, so there you have the meditative / transcendental / self-conscious aspect. Mission accomplished! No, seriously, the terrifying and ominous atmosphere are little twisted, yet it fits to the whole concept of this specific and intriguing timeless sound-experience. Once again, it’s lengthy for sure, and it might be a difficult aspect to maintain, or at least to keep your attention whole of the time; but then again, here comes the meditative element, the ‘dream-away’ attitude that was chosen specifically for this sonic creation.

The second composition, simply called ‘2’, is little different, for it comes with a much denser approach. Instead of low-frequency soundscapes, this second composition has much more to offer. It’s like a droning journey through transcendental levels of the human psyche, introducing mesmerizing, even hallucinogen aural fragments and bewitching, semi-ritual ambience. I think the level of suffocative oppression is even stronger presented, leaving the listener rather anxious than relaxed (once again: the meditation is quite opposite to what I was expecting, being the tribal-shamanistic or, why not, Tibetan-inspired oh mani pad me uhm trend… There is quite a contrast within this piece, for it starts pretty breath-taking, before evolving into pounding and breath-taking passages of utter minimalism.

In conclusion, I have to warn you, for Two Extended Pieces For Meditation might not be your ‘trusted’ aural pleasure. More than two hours of repetitive and lo-fi droning noises are a difficult experience that might disappoint after a couple of minutes. Be aware of that. Then again, within the right circumstances (environment, time of the day / of the year, accompaniment, mental state of mind, and so on), this extremely extended aural travel might be inspirational on several levels. So why not giving it a try, at least a first try-out via the worldwide net-thing, for example, before ordering the tape via Lurker Bias?...