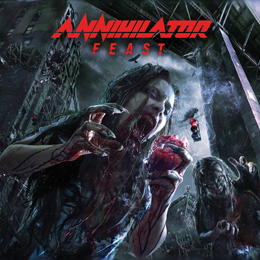 Letting me review Canada's top selling Thrash Metal act Annihilator's 2005 and 2007 albums Schizo Deluxe and Metal, our editor-in-chief suddenly (if I remember correctly, I was kinda swamped in other work in those days, with new labels the Chief had pulled in and which needed to be impressed by our writing skills) relegated the job of auditing the band's self-titled 2010 album to colleague Jeroen, whom made that a relatively good but short job!. For Annihilator's latest album however, our revered Chief preferred to have the job done by someone who's not that short in words as well an useful details on the release.

So, first things first...and let's check up on the band's history since that 2007 last review of mine (posted 25/04/2007, and still available – as it the Schizo Deluxe review, posted 10/10/2005 – for your fact-finding needs in the Archive section of this here website). First of all, the steady line-up of the band is altered somewhat, with only singer/ rhythm guitarist Dave Patten and founder guitarist/ backing singer Jeff Waters as the constant members, and since 2008 these two resorted to operating as a duo in the studio, recruiting  the necessary musicians as needed for live performances as needed. Following drum legend Mike Mangini (whom played on the Metal album) was one Alex Landenburg, but he was out again at the end of that year. On the 2010 album, the guys made use of drummer Carlos Cantalore, but he was also not retained as live drummer, that job relegated (for 2007-2008 touring) to one Ryan Ahoff. On the bass then, we still had Richard Bergquist on the 2007 album, but he was replaced by one Brian Daemon, whom himself was again replaced for more extensive touring during 2007 and 2008) by one Dave Shelton and for the 2010 album the bass duties were (as in the band's past) secured by Waters himself. For live performances, Annihilator hired the services of bassist Alberto “Al” Campuzano and drummer Flo Mounier...the latter replaced in 2012 by Mike Harshaw.

The new album comes to us as a a welcome addition to the perpetually high-quality output by this band, and although it is a mere continuation of what has already been, the quality of the songs is indeed of such catchy quality (Waters has always had a knack at incorporating elements of Speed Metal, and adding the correct amount of melody to his play to make it ascend above your everyday or even the better acts in Thrash Metal act out there), that it's hard nót to give the album continuous listening sessions, or to lock these 9 new songs into that special place in both our hearts and minds, where we store away only the very best music we know! When I last checked, no new material was posted on the band's official website (www.) annihilator.com, nor on their facebook, but of course, at this moment of writing it's still more than a week before release (wanted to get the job done ahead of time for once...also because I'll be on a holiday around then). Check it out again around that time, okay?

By the way, the album comes to us in different formats: besides the “regular” Jewel Case CD and Gatefold vinyl, there will also be a Limited Edition Ecobook, which will hold a bonus disc entitled Re-Kill, with 15 classic Annihilator songs re-recorded with Dave Patten singing. Not exactly “new” material, but I'm guessing a nice item for those fans who've witnessed Dave singing those songs in live conditions. And about that...the band is touring Europe in October, and visiting our country's Biebob venue in Vosselaar on the 12th of October.