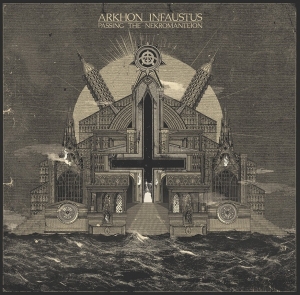 I do (did) follow Arkhon Infaustus as from the transgression from last century to the current one. I do (did) surely appreciate all releases this French band did in the past (especially released via Osmose Productions), but I was not exactly totally blown away either (personal opinion – nothing you need to worry about) – yet at the same time, I think this band improved throughout their existence. So, I wasn’t exactly depressed when they split up about a decade ago, but still it was a pity.

Then, suddenly, ma chère Blandine of the Les Acteurs De L’Ombre Productions crew, warned me for the resurrection of Arkhon Infaustus. Apparently, DK Deviant had decided to reform the band. Together with drummer Sylvain ‘Scvm’ Butet (you will surely know some of the other bands / projects he is (or was) involved with, such as The Order Of Apollyon, Livarkahil and Temple Of Baal), he entered the famous Hybreed Studio with engineer / mixer / master Andrew Guillotin (think: Monolithe, Temple Of Baal, Nydvind, Carnal Lust and many more) to record the material which he prepared before. It resulted in four lengthy pieces (in between seven and ten minutes), which got released on both CD and vinyl via one of the most promising French labels from this decade, higher mentioned Les Acteurs De L’Ombre Productions.

I must admit that I am ‘with them’ as from the very beginning of this newest pièce d’art. Amphessatamine Nexion, the opening track, starts with a dark, slow introduction, somewhat bewitching, doomish and ominous, pounding and marching slowly, forward in an unstoppable manner. After a (short) while, this trend continues, introducing darkly spoken voices and many layers of strings and drum patterns, and in a natural way, as if it’s the most normal thing to experience, everything evolves, permanently, towards blasting affairs of blasphemy, misanthropy and hatred. It sounds filthy, for sure it’s massive, and wow, what a variation and professionalism! Sylvain is a grandiose drummer, and his salvos, like artillery fire, are combined with a craftsmanship of the highest level. But especially the song writing impresses me. The increased maturity of the material almost leaves me speechless. For sure you will experience the typifying morbidity of this French act, comparable to the past. But in their continuous ‘positive’ evolution (that ‘positivism’ goes for the quality of the stuff, not the message!), Arkhon Infaustus do reach a level untrodden before. Slower passages interact with many eruptions of sonic violence, blackening any hint of light, and this feels so fluent, so easy, so organic to do.  It’s almost incredible and unbelievable to notice this progression. The combination of screams and grunts, the equilibrium in between the different tempos, the interaction of melodious parts and ‘full force ferocity’ outbursts, well, it all fits, it truly does. Especially the last track, an instrumental epic called Corrupted Epignosis (lasting for ten minutes), is like a summary of everything that makes this EP a great recording, combining all ingredients that define the improved character of this French band, marking the grotesque progression compared to the past. Besides, there is something like creativity’ going on too (very prominent is this final composition) – no, I’m not speaking about an avantgarde approach, my Lord forbid… It has to do with the variation of song structure, speed and melody, as well with the injection of technically high-standard riffs.

From productional point of listen, Passing The Nekromanteion deserves nothing but superlatives too. The mix is simply exceptionally great, with a perfect balance in between the different instruments. Besides, there is a certain apocalyptic roughness – not noisy or mechanical-industrial – creating that additional level of malignancy and chaos.

Fans of Belphegor, Morbid Angel, Spearhead, Temple Of Baal, Antaeus, Angelcorpse, Revenge, you know, have no choice but to search for this devastating harshness!