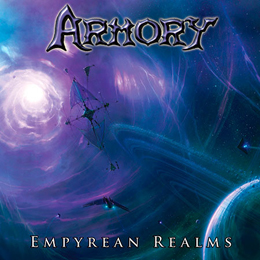 You know, I've always been convinced that the place where people grow up can be a major defining element in how they look at life in general, and their relations in particular. Those growing up in barren conditions will usually develop feelings of jealousy and envy, and petty disagreements may grow into insurmountable breaking apart and even warfare. Of course, the more people live together per square mile, the swifter inequalities will arise, along with all those bad feelings!

Weird intro, you might say, but there's a good reason for it which relates to the Power Metal band of this review. You see, Armory hails from Townsend, Massachusetts, situated some 50 miles from Boston in NW direction and, bordering the state of New Hampshire, its less than 10,000 inhabitants reside on an area of some 85 km²...an area which, although at relative altitude and therefore not insensitive to the rigors of the Winter season, includes a valley (along the Squannacook river) which is secluded inside several protective mountains, which make for a very specific micro-climate in which heavy clouds rarely get a chance of existence. In other words, a relatively fertile soil in a valley with plenty of water, and plenty of sunshine...an ideal environment to cultivate neighborly feelings into everyone native of the region. A disposition which, I'm convinced, has made the members of Armory stick together throughout its career thus far!

You see, the band was originally founded by guitarist/ drummer Joe Kurland and guitarist Chad Fisher (now also a member of Soul Remnants) in the summer of 2001, and in the following months the duo composed the basis of the 10 songs which would eventually end up on the band's debut album. It wasn't until the Winter of that same year, that the band was expanded by the addition of Joe's younger brother Adam on lead vocals, and by Thomas Preziosi (like Chad also a member of Soul Remnants, but equally of Cryostasium and Forced Asphyxiation, and at the moment a former The Year Of Our Lord member) on the bass, both of whom were already friends from high school, and inflamed with the same passion for Heavy Metal prior to the band's formation. With the basis of the music already written, the next step was to write good lyrics, and as the band members were all into philosophy, fantasy and epic adventures, that's the direction where the band took those. Although Joe wrote sóme of the lyrics (and still does), the bulk came from Adam and third Kurland brother Jason, in spite of the latter not actually being a band member! Aiming to achieve perfection in songwriting and performance, bot lyrics and compositions went through several changes, and eventually the band recorded its demo version of their The Dawn Of Enlightenment album in 2004. Back then however, the band still lacked the proper recording equipment and expertise to ensure a good recording sound, or a good-looking product, and therefore the demo was never officially pressed or promoted.

Convinced of the quality of their material, and having passed the experience that professional help was needed for the recordings, the band contacted engineer/ producer Peter Rutcho (also a musician, with a former tenancy in the bands Pornogore, Discreate, Bloodwitch, B'Chunk, and Blistered Earth, and currently also active with Vomitron, Graveheart, Frozen and Crotalus, and as live member with Birch Hill Dam) in 2005, and re-recorded the complete album, re-working the vocal melodies and having the originally programmed keyboards being performed by Rutcho...whom was subsequently recruited into the Armory fold. For the artwork of the album, the band connected with Texas based Steve Goad, and the album (all 10 original songs – in reworked version – with bonus covers of Iron Maiden's “Flight Of Icarus” and the first stage in Dr. Wily's level from the NES video game, Mega Man 2) was eventually released on December 28, 2007, to glowing reviews by over 100 reputed Metal webzines and magazines. Music by the band found its way to being played by several radio stations, and the album was eventually distributed worldwide through several music stores. To promote the album, several shows were performed (including gigs where the band supported Joe Stump and Banshee), and to do that in optimum conditions, Joe decided to relegate his live drum duties to the band's life-long friend Tom Viera (at this moment a former member of Soul Remnants and Frozen).

And perhaps this is a good point to come back to that “sunny disposition” of the band's members? Because, after all, between the last gigs in promotion for the debut album, and the recordings of the current one...there's after all over 4 years! Enough time to break up loads of bands with a gloomier view on life, especially since during that same time, some members of the band were out of action due to having to get their degrees at University! Still, music writing sessions for the second album by Chad and Joe had already begun back in 2002, and both improving their skills in their own sections of composition made the duo analyse and revise their compositions on a constant basis...because perfection was the goal, you know! As before the Kurland brothers (Adam on top) took care of the lyrical side of things, and with Joe meanwhile having perfected recording techniques, he became eventually responsible for the new album's recordings of guitars, bass and vocals. Leaving Peter with the task of recording drums (again, or rather still, performed by Joe) and keyboards, and doin' the mixing and mastering. During the recordings the band also recorded a cover of Riot's “Thundersteel”, and one of the battle scene music from the SNES video game, Final Fantasy: Mystic Quest, with the consideration of possibly releasing that on a Japanese version of the album. They also recorded a cover of “Where The Rain Grows”, which was featured on HelloRay – A Tribute To Helloween And Gamma Ray, released through Epicus Records in early 2012. Finally, a cover of the song “Love Is Pain” was recorded for inclusion in By The Gods: A Noble Tribute To Virgin Steele.

Which brings us back to the album at hand, and I must say, a jewel among the Power Metal releases with a Progressive flavouring, which can stand proudly alongside albums from the most successful acts in the genre! Composition-wise, the music entices the listener from opening note to end riff, giving both those who prefer easy melodies as well as more experienced music fans something worth to spend time (and money) on! To boot, the already soaring lead vocals are supported by even more stellar harmonies and backings. In essence, here's an album which no Progressively minded Power Metal fans can afford to lay behind, in fact here's an album which may well find fans beyond that already broad sub-genre! For your listening pleasure, the band posted the album's song “Dreamstate” (alongside 3 songs off the debut) at (www.) reverbnation.com/armory (where a comparison of Armory with the likes of Iron Maiden, Helloween, Angra, Edguy, and Rhapsody Of Fire is stated – personally I feel the and brings something of its own, never mind the possible similarities), and for 30-second samples of all nine songs on the album, you can go to the “iTunes” section at (www.) facebook.com/armorymetal. Also check the “Music” and “Video” sections at the  band's own (www.) armorymetal.com. By the way, Metavania Music was founded by Joe!