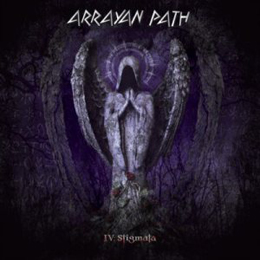 Power metallers Arrayan Path have released their fourth album, IV: Stigmata. After their highly acclaimed previous albums they are back with a darker concept album which contains a lyrically aligned story based on Christian thaumatology.

The album is packed with excellent musicianship, plenty of decent riffs which are galloping, heavy, aggressive and well performed, intense double bass drumming and catchy vocals that tend to get stuck in your head.  One after another power metal hymn is unleashed upon the listeners while song arrangements still stay very good, the music switches between faster elements and a slower dynamic helping to build a certain dark and brooding atmosphere. The second track “The Bible Bleeds” is a perfect example, blending heavy, fast rhythms with catchy melodies and choruses.

The slower songs, such as “Stigmata” or “Disguising Your Soul”, focus on subtle symphonic elements and slow paced, melodic guitar lines, while the band still manages to keep the dark subject in there. A song that could easily be distinguished from the others is “Harbingers of Death” a stunning opening bass line, heavy riffs and another set of killer vocals, especially in the chorus.

Arrayan Path certainly have evolved, become more mature and confident as individuals, probably they will surprise us even more with their talent in the future. Overall IV: Stigmata is very good and power metal fans certainly won’t be disappointed.