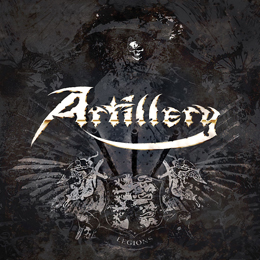 Artillery Legions their seventh album… This will also be the first album to feature Josua on drums and Michael Bastholm Dahl on vocals. These guy making thrash like nobody else. The ten songs are well written for a trash record. What a clean-throated Voice from Michael Bastholm! My favorites are the powerful, punshig “God Feater” and slow Global Flatline”. At all not a bad album from this Danish trashmetal band. Well done!