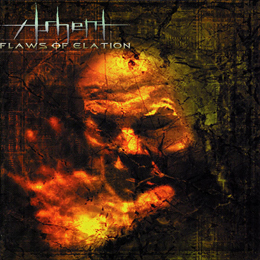 Mind you, this is not a new album, but merely a reissue of Ashent’s 2006 debut album ‘Flaws Of Elation’.  This reissue follows only seven months after the release of their ‘Inheritance’ album. However what might incite Ashent fans to buy this album is the fact that this reissue also contains the four tracks that were released as a demo in 2004. What this Italian band brings us is decent progressive power metal. Not all band members are Italian though, the vocalist Steve Braun is an American, and a good vocalist he is.  The other musicians also seem very good.  The only minor point I found on this album is the occasional death grunt, but one might surcompass this, as the rest of the music is very good indeed.

This is by no means an album that a traditional Dream Theater fan should by, because Ashent have brought in a harder edge, I’d state that they have incorporated some trash elements in their prog metal.  However, this seems to work for me.  So this is a band that sits on the ledge between trash and prog, and therefore might not really appeal to dedicated fans of any of the aforementioned genres.  If you have an open mind, and are willing to listen before making a judgment, be sure to give this a try.