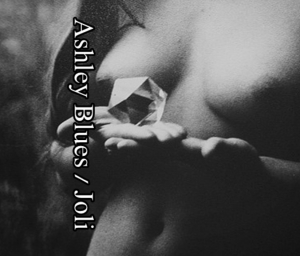 Death Carnival Records came up with a very limited split (edition of twenty copies only, minus mine…), a collaborative in between Russia’s Ashley Blues and American one-man army Joli. Both sonically adorn one side of the tape, which comes with mysteriously-attractive artwork.

Side A brings three lengthy compositions (in between eight and eleven minutes) by Ashley Blues (named after the, eh, live performance actress? – whom I have never heard of before, naturally… …nor seen…). This outfit by Artem Sviridov has been extremely active as from 2011 (with many releases going on, especially in split-contributions), but I think this contribution was the last thing Ashley Blues did (at least under this specific moniker). The somewhat extravert Noise mixes the elegance of free-style Noise excerpts with the nihilistic identity of the harsher approach of the genre, yet without losing its focus on ‘melody’ (haha, as if this doesn’t sound dramatically theatrical – yet still…). Especially via creations like Farewell one will surely experience the subtle beauty of Anti-Music. The orgiastic pleasure that gets composed, the aural way evidently, is quite remarkable, for it isn’t that evident to experience this kind of divinity within the harsher Noise scene that easily. Ashley Blues somehow succeed to translate that equilibrium in between the massive intensity of Noise’s ugliest façade with the elegance of aural attraction. 7,5/10

The B-side brings one lengthy piece, Brooding (half an hour of length), created by Jason Wolpert aka Joli. With this outfit, Jason has been quite productive as from very early 2014, by the way. Brooding brings one skull-crushing outburst of Harsh Noise Wall, which starts pretty promising. But since nothing happens for quite some time, it starts getting annoying too after a while. The disturbance might be created consciously, but it misses its goal, I think. Actually, I am getting irritated after a while. The first time, I did endure, the second time it was rather difficult to go on, and now I am bored and irritated at the same time… 4/10

I have to admit that I am not that ‘deeply’ into the Harsh Noise scene, but Ashley Blues convince with their mixture of destructive nihilism and subtle elegance. Joli too might attract fans that are rather into the higher ranks à la Ataraxy or Skeletal, and that means something, I think, although these ones have that little ‘more’ to attract the listener. To my opinion, we have a winner and an underdog…