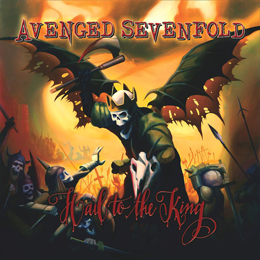 Avenged Sevenfold is an American hard rock/metal band from California U.S.A. and was formed in 1999. The band consists of vocalist M. Shadows, guitar players Zacky Vengeance and Synister Gates, and bassist Johnny Christ. Their drummer (the Rev) unfortunately died a some time ago and was replaced by the drummer from dream theater: Mike Portnoy. But now the band has found a drummer in Arin Ilejay.

Originally the band came to the music scene with a metal core sound witch included screaming vocals and heavy guitar riffs, but the band changed their style on their third release called “City Of Evil”, which features more of a mainstream hard rock style, but with a special vibe going on. With lots of mood changes and with a lot of swing going on.

Since than, the band has stayed faithful to this formula witch actually suits them and brought forth  “Hail to the King”, their sixth album witch was released on August 23, 2013. Witch actually disappoints in my eyes. Ofcourse we have Zacky and Synister who show off their guitar skills. But this album is a bit to mainstream and fails to set itself apart from other albums/bands like their previous records did. Also worth mentioning, it seemed they slowed down their music as most of the songs are rather slow in comparison to their previous work.