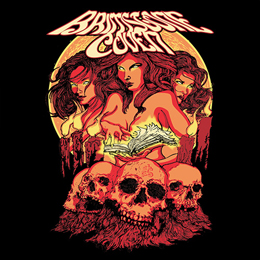 Brimstone Coven is compilation of their 2 previous albums “Brimstone Coven” and “II”. Starting in reverse order first the ten tracks from album “II” and then the seven songs of their debut album “Brimstone Coven”. I was disappointed that I never heard about this group. Maybe too busy with others things and something some jewels slips between my fingers. When I starts the album and heard the first ten notes I knew this album can be the one. First I thought it was a new cd but after some investigation on the web and reading the little info added by the album. Was it a compilation of their 2 albums. But the first track “Cosmic Communion” brought me back to the seventies Led Zeppelin, Pink Floyd and a little bit Black Sabbath. What a song I ended foot stamping on this one. Most of all the play mid-tempo rockers and quieter numbers and the second track is a quiet one. Some special track is number three “The Black Door” Starting with some reversing singing that brings you to a darker site of the group. This will be a trademark of Brimstone Coven some monotone close harmony it is a strange feeling you get when you hear them singing. And so on, some strange dark sounding sphere songs every time some new sounds that I like. And then the end of the album “II” Tenth song “The Folly of Faust” some heavy, deep and slow song that brings you back to your selves. And now “Brimstone Coven” their debut album. First track eleventh on this cd an Intro that say nothing at all. But then “We Are Forever” number twelve on this album rock like no other you can hear that this is an older version of Brimstone Coven. My question of this album is why is the second album on the first place and then their first. Why not other it by date so that you can hear their first work and then hear how they grown. Why I never knew these album will be a riddle to me. But my opinion is buy this record.