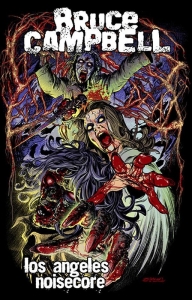 A project named after a horror actor, Give Praise Records taking care of the release, and ‘noisecore’ as part of the title? Yippie and Allhellluiahaha, let’s celebrate a new Gospel release. Give praise to the Unholy One!

No, as one could expect, this tape represents a specific parental advisory-oriented form of sonic terror. As the title suggest, Bruce Campbell (sometimes named as Brucexcampbell or BruceXCampbell too) hail from Los Angeles, California. The recording compiles two earlier releases (both of them initially recorded and self-released, if I’m not mistaken, in 2013), being Hail To The King and Humanity Deserves To Die (you bet!). Each side of the tape consists of the six elegies from both EP’s.

Hail To The King represents six short (five of them clocking less than two minutes) eruptions that combine Punk-laden Crust and D-Beat Grindcore. It lacks of originality and the sound quality is somewhat dull and dense, but for sure this stuff exhales the glorious days of the (North-American) scene from two-three decades ago. And it’s the honesty and conviction especially that are attractive, rather than the song writing (the latter lacking of an own face, as sort of mentioned before). No, seriously, the whole attitude represents pride and persuasion, and who am I (who are we) to dislike / deny this attitude?!

The tracks on Humanity Deserves To Die are little lengthier, and in general much more intense / intensive, grinding and d-beated. This material is little more creative and experimental at the one hand, and focusing on the essence of the most vile definition of Grindcore at the same too. The hyper-speed assault are filled with discordant breaks, tremendous decelerations and the most gore elements from the old schooled Death Metal scene, yet still with that flair of Punk / D-Beat / Crust nastiness in mind.

In case you are a Grind-freak, there is no chance you will not appreciate this kind of nastiness, and that’s a promise. This material brings everything the scene needs, but created with such conviction and grandeur. A description like ‘monumental’ would be slightly exaggerated, but it comes close to the truth, I guess… Los Angeles Noisecore surely is a nice acquaintance to Bruce Campbell’s MuSICK…