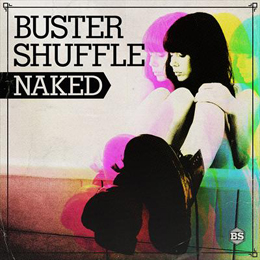 Ach...Buster Shuffle, that delightful Ska Rock band from London (and just forget about the funny fact that their name abbreviates to BS, will you) centered around lead singer/ pianist Jet Baker...got acquainted with 'em through the Spring 2011 re-issue of their debut album Our Night Out by the German People Like You label, didn't I? What a whopper of a debut album that was indeed...I mean, I did, after all, put the album in my 2011 year-lists, didn't I (check the review, posted 07/05/2011)? In checking the history of the band since that review, I found out that not only did the label sent out promos again a year after the release (resulting in our clueless editor-in-chief – he's really overworked sometimes – prompting colleague Tim to review the album all over again – posted 11/03/2012), and that in between the band have already released another album...but also that I'd missed part of the band's story. So, let's get into that first, shall we?

You see, upon signing their contract with PLY in the Summer of 2010, BS immediately embarked on a tour opening for Germany's PunkSka Rockers Broilers in August, and followed that up with a tour through winter-bound Europe and UK with Canada's The Creepshow (both of which were documented in the live video Buster Shuffle – Germany Tours With Broilers And The Creepshow). That same winter BS also became part of the Save The 100 Club campaign, along several other luminaries, playing a one-off sold out show at the London venue. Then, after PLY re-issued Our Night Out, BS crossed the Channel again, touring Europe with Art Brut, before touring with The Wombats, and subsequently playing venue and festival dates in Germany, Holland, Belgium, Denmark and Switzerland throughout Summer.

Also during Summer 2011, the line-up was expanded by Pete Oag on backing vocals and Hammond organ, and backing singers Carrie Griffiths and Debz Bridgeman, after which the band secluded itself in the rehearsal place to write the material for its sophomore album Do Nothing, which would be released in Summer 2012, sporting contributions from Mickey Gallagher (of The Blockheads and The Clash fame), Roddy Radiation (of The Specials), Wag (The Infadels) and Ian Catskilkin (of Art Brut). Thanks to the band's ever-growing fanbase, the album saw songs being requested for play on several important radio stations throughout Europe (Baker even becoming a regular invitee to Danny Wallace's breakfast show on XFM), with the album featuring on several charts as well. Sold-out shows in most every major European city followed, as well as high-profile festival slots in Germany and Czechoslovakia and massive arena shows in Italy. Then, UK supports with Madness, The Blockheads, The Rifles and Shed Seven...but also smaller packed in-store gigs, furthered the band's positive reputation.

2013 came along, and BS conquered new fans, playing to huge crowds at French festivals, and then playing at the legendary Dour (Belgium) and Fusion (Germany) festivals, as well as performing at the UK's Wickerman and Rebellion events. And then, it was time to start putting together yet another set of new songs for this, BS's third album. The recordings were mixed by the much-in-demand Jamie Ellis (whom you might know from having worked with the likes of Florence & The Machine and The Rifles, and whom is also known as the former protégé of megastar Adele producer, Paul Epworth), and show a slight deviation from the album I came across three years ago, in that occasionally the Ska is set aside for a more Pop-geared Indie Rock song (think Blur, so says the bio sheet, but of course the slight Cockney accent in Jet's voice – diminished in those songs for some reason, and to great positive effect too – still give 'em that BS touch). That is especially heard on the three last songs on the album, the normally listed “Put Up” with it incredibly nice harmony vocal intro, and the two untitled bonus tracks...but also on the somewhat balladesque “Take Him Down”. If anything, it makes BS even more appealing to me, than they already were!

For a couple of more normal Ska Rock tracks (off the previous albums, I'm afraid), check the “Band Profile” section at the band's facebook page (find the link at the band's own (www.) bustershuffle.co.uk, where you can also find music clips for the new album's “Naked” and “South” - also of the more lively Ska Rock style), but for the diverging type of songs, you'll have to check out the 30-second samples at iTunes, I guess! Oh...and of course the album again gets featured in the year-lists!