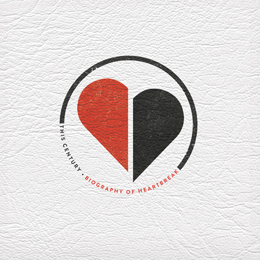 Holy smokes! The crap they throw on my to-do list of reviews these days...oh, wait a minute, before spewing any more of my personal feeling of this Phoenix, Arizona based band, let's first dig into its history!

Formed in 2007 while most of the members (singer Joel Krantz, guitarist Sean Silverman, bassist Alex Silverman, and drummer Ryan Gose) were still in high school, this band experimented with several names. They performed twice under the monicker of Modern Poets and then changed it to Evident Earth. They eventually decided on their current name, after the guitarist had jokingly said they would be “lucky if we come up with a name some time this century.”! Between 2007 and 2009, the band self-released a series of Ep's and singles (starting with debut EP 2007, issued that same year, followed 2008's Look What We Made EP and the Dream Of Christmas single – 2009's Kiss Me Like It's Christmas single was followed by the No Way Out Digital sampler and the To Love And Back EP) before the band signed to Action Theory Records. In 2008 the foursome also signed to Eighty One Twenty Management, whom consequently helped the band onto the Baby Cakes Tent during the Vans Warped Tour 2009.

Signing to Action Theory meant getting into the big league of the music business, as the label is a subsidiary of major label Warner Bros. Records. A first release under their new label came with the  Hopeful Romantic Sampler EP in 2010, consisting of 3  sampler songs which were due on their 8-track 2011 album Sound Of Fire. The band toured on Bamboozle Left (with bands such as Anarbor, Never Shout Never, The Ready Set, and The Summer Set), and also set out on the nationwide An Evening With The Main Tour with label mates The Maine and special guest Austin Gibbs. In the fall of 2010, the band had to cancel the last dates of their Hey Monday Tour due to vocal issues suffered by the singer. In Spring 2011 the band was back on the road for the Cardiology Tour, in support of Good Charlotte and Forever The Sickest Kids. The band's debut album was released in April, and followed by a stint on the District Lines Tour. During Summer, the guys did their own headlining Young And Useless Tour, tagging along Cartel Hulsey and Austin Gibbs (the latter dropped out halfway and was replaced by singer-songwriter Sweet Talker on select dates). Spring 2012 saw the band on their Acoustics Tour with The Getaways (following the self-release of an EP entitled Acoustics), and in June the band did a show in Manilla (Philippines) alongside We Are The In-Crowd and Set Your Goals (two songs off the debut album had gotten into the top of the charts there).

Keeping up a busy live schedule, the band headlined the The Endless Summer Tour with Austin Gibbs, and went on to make a new song with him, called “Someone For Everyone”. The band also self-released a single entitled Bleach Blonde, as an introduction to their upcoming sophomore album. To round off the year, the band opened for The Maine on the latter's UK/ Europe Pioneer World Tour during the Fall. This Century returned to Manilla to play a free concert sponsored by Pulp Magazine in early December of last. (info culled & re-written from the band's page on Wikipedia)

Meanwhile, the band returns with its sophomore album, which is again self-released and licenced by Rude Recorz, and it's a perfect display of the kind of music as brought by several boys bands since the '80s. Pop Rock and Electro pop are terms used where this band is concerned, but things are só slick, só cleansed, one wonders where these dudes got the musical idea for their band from, and why on earth I am actually making the effort of reviewing this. I mean, possibly the success of One Direction has something to do with it, but at least thàt band uses a sturdy Rock foundation for its music. What I'm hearing here belongs in the world of Backstreet Boys, or Get Ready (they're Belgian, so a lot of the readers won't know whom they are)...not in that of a website named Concrete Web!

Oh well...you know, we mustn't be too mean! The guys actually make some good music, if you're into that type of Pop, and I'm sure a lot of (younger) girls are simply gonna swoon when listening to the singer's love songs. Because, in contrast to the negativity of the album title, the songs' lyrics are actually quite uplifting. If you should feel inclined to check the musical prowess of this foursome, log onto their own website (www.) thiscenturyband.com (possibility to listen to samples of several of the band's songs, including the complete Sound Of Fire album and the EP's To Love And Back and Hopeful Romantic Sampler, and a couple of the new album's). The band also has a facebook and MySpace page, but the first holds no music, and the latter was unavailable to me at the time of checking (therefore, by all means check it out – link to MySpace and twitter as well as YouTube at band's own website). Now, leave me alone, and let me get on with a next review! Points are high due to the decency of the band's compositions.