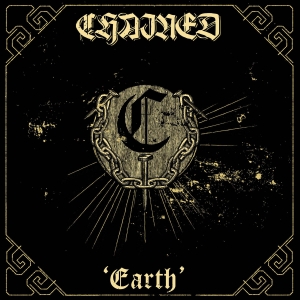 Keys of air, keys of fire, throw my soul, rise it higher…

In a tormented country like Syria, one does not always expect to meet bands or projects that might make it to this site. However, French label Antiq Records offered me a promo copy of Earth, the debut EP of Chained. This is a new project by a very young guy from Syria, based at the Mediterranean shores of the city of Banias. Mahmoud Mohammad, the guy behind Chained, is a producer, session / studio musician, composer, film music writer and multi-instrumentalist, who did mix these four tracks himself in his home studio. The EP is available via digital sources and on cassette, as said via Angers-based label Antiq Records, home to bands and projects like Incipient Chaos, Créatures, Ordo Blasphemus, Theoria and more. There will follow some more reviews on Antiq Records material in the near future, by the way. But first some words about this one.

Earth consists of four compositions that last in between five and eight minutes, all together clocking 26:39 minutes. It brings very melodic and atmospheric Black Metal with a traditional basement, but also quite a modern approach. But let’s first tell something about the sound quality. To my opinion, this one is quite cool. In general, the result is quite clean, without that terrible clinical decency, and maintaining a certain roughness in sound. The overall mixture is of a modest height, with a head role for the vocals and guitar leads especially. Though, all rhythm instruments are quite ‘presented’ as well, and that isn’t but the only right way to do.

Composition-wise, however, I am even more thrilled. Okay, I must admit that I know a few hands full of other bands / projects from Middle-Eastern countries that are just awesome, but this seems to become the rule rather than the exception. Seriously, what Mahmoud does with his Chained project is of a superb quality within its specific blackened sub-genre. This kind of Black Metal, as said being based on the tradition of the scene (and then I am referring to the glory of the Mighty Nineties, evidently), is strongly guitar-oriented. Lots of tremolo riffs sort of ‘carry’ the main structure of the tracks on Earth. In both faster and slower parts, these guitar melodies are like a spine to hold up the composition. Sometimes it’s hypnotic, then again rather pushing, epic or atmospheric. But there is much more than fine guitar riffing. The drum patterns, for example, are quite impressing. Within the slower to mid-tempo passages, the drums are supportive, yet at the same time acting like a necessary ‘organ’ to support the whole entity. But within the faster, sometimes even blasting excerpts, these salvos just strengthen the harshness of these eruptions. Superb. The vocal side, well, is of a high level as well. Mahmoud does not have a distinctive throat, but the raspy character just fits to the whole experience. No false tones, no fake shouting, just strong growling and screaming, somewhat evocative, right here. And occasionally there are clean and harmonious voices too. Normally I am not exactly a ‘fan’, but I do not dislike those in this recording’s case. An element that characterises Chained too is the use of synths and piano. Of course that isn’t new or renewing, but of high importance on this recording. Keyboard lines aren’t used whole of the time, nor as nothing but an introductional addition either. No, these keyboards appear more than once, at the right moments, adding a surplus above the -already variating- composition structures. Sometimes those keyboards are bombastic and epic (like in those Tolkien-inspired acts), then again it sounds rather like promoting the emotive atmosphere, or as a means to empower the mysterious ideas behind certain aspects. The synths are used with wisdom and knowledge for sure.

All positivism in my former paragraph come to a peak when noticing the great song writing and clean performance. I did refer to the speed, which varies from quite slow over mid-tempo towards quite intense levels of pyroclastic wildness. I cannot but praise the fluent, natural transition, for it stands miles away from brainless exaggeration. But the song composing itself is very professional too, with all those breaks, interactive structures and melodies.

In conclusion, I have nothing but superlatives. Everything fits on Earth, although there is not exactly anything original going on. I’m sure that this Syrian guy needs, but especially ‘deserves’ our support to continue. I look forward to hear more from this project, for I am truly blown away by the result of this first EP!