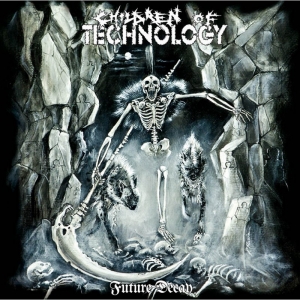 Since having reviewed this Padova based Italian band's debut full-length album (It's Time To Face The Doomsday; review posted 27/10/2010), quite a few things happened, among which my greater understanding of their history.

For starters, I now know that the band was founded in 2007, and that back then their bassist was a dude known under the monicker of Turbo-Rattle Fingers (whom had a history with O.D.O. and currently apparently plays with both Death Mechanism and Bulldozer – the latter a cult band in the Italian Extreme Metal scene). Other info I was unaware of, is that the band released a 6-track demo entitled The Day After prior to their 2008 DVD (the same year, in fact). More: prior to the release of the SpeedPunkMetalCrust EP, the band also had a split 7-inch out (April 2009) with Bastardator through Black Shit Noise Productions.

In between the debut album and this, their sophomore “full-length” (8 tracks making for just under 29 minutes' worth of sounds) output, the band had a another couple of “smaller” releases, starting with the split EP with Blüdwülf and Tiger Junkies, which was released in August 2011 through the Break The Chains imprint, and on which each band put down 2 new songs. Then, the band signed onto the Hells Headbangers  roster, which had the 2-track 7-inch Mayhemic Speed Anarchy, released in Dec. 2012, as a first result! In 2013 then, the line-up was changed once again, with original members Deathlörd Astwülf (vocals) and Goddess Of Hammering Chaos (drums) being forced to accustom two new members to their specific brand of speedy Punkmetalcrust. And those “victims” were none less than Barbarian's Borys Crossburn (on guitar) and Saturnine's Mad Jex (on the bass).

For those into old-style music carriers, there's the good news that the album was also issued on cassette (by Terror From Hell) and 12-inch vinyl (Ripping Storm Records)...the bad news is that there was a limitation on the output rotation, with only 300 copies made of the cassette, and 500 of the LP's. Of course, there's no limitation on the CD and digital downloads. If you're unfamiliar with the band's stylings, check out the “Music” section of their facebook page!