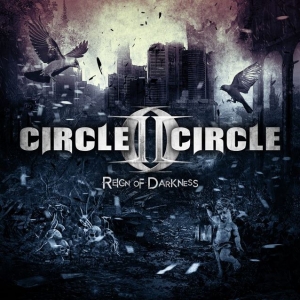 Circle II Circle is and was fronted by Zak Stevens, and since their beginnings some years ago, I guess it was 2001, they have always sounded a bit like Savatage, which may not sound as a wonder, as Mr. Stevens fronted this band between 1992 until 2000.

When I first heard this band, having been a big fan of Savatage, I immediately liked them, and even found them better than Savatage.  Let’s say I became very fond of their first three of four albums, but then my interest started to fade.  Not that they had taken other musical directions, but I found their later work weaker, especially their previous album ‘Seasons Will Fall’.  So it was with not so high expectations that I started to listen to this new album.

And, in the beginning, I was disappointed;  But after a few spins this album started to grow on me.  As a matter of fact I find this is maybe their best album so far.  Not that there are songs who really stick out from the rest, except of course the last track ‘Solitary Rain’, which is a power ballad the likes of it you may have never heard before.

My conclusion : fans of this band who found they had to reinvent themselves, might be surprised.