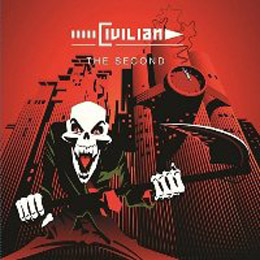 Hum, the name of this Belgian “Hard Rock” act from the Limburg province sounded rather familiar to me, so I thought that maybe I'd come in touch with the quintet through a previous release and so, after having browsed through the info sheet we were sent along with the physical copy of this album, and having found that the guys indeed had a first album out in 2012, I checked all my reviews for that year...and the following half year, because sometimes stuff gets to us a bit later. All in vain, because trace of a previous encounter with the band was non-existent. Which is too bad, because I was hoping to be able to refer to such a past review  for historical info on the band which I did not find in the info sheet delivered us with this album. You see, I usually do quite extensive research on a band prior to reviewing an album, but just recently I've been forced to cut back my Internet to a mere checking of mails. In other words, the info conveyed to you here will be a minimum too.

In essence, I have no idea about the time of formation of the band, and neither do I know whether the members present today (lead singer Mark Van Luijk, guitarists/ backing singers David Dejeneffe and John Thijs, bassist Christophe Beliën, and drummer/ backing singer Johan Van Den Berghe) were all there at the beginning. But at least I have reason to believe that the same line-up also created the 2012 debut album Wake Up Call, which was self-released (one the band's own Sausage Orphans label) in 2012. An album which, with a sound composed of Hard and Groove Rock plus Metal elements, apparently got some nice reviews (and, who knows, it may have been reviewed by one of my colleagues...that is indeed in the realm of possibilities, but my access to the Internet being limited, I suggest you might check this possibility for yourselves, perhaps?), and those must in turn have given the band opportunity for some extra gigs (sorry I'm using such suggestive wordings, but exact info lacking I can only surmise this is the way things must've gone, as a natural process, you know...and the little info available to me certainly suggests that the band would take on any possibility to play).

Eventually the band again went into the creative process '(or perhaps that's a ongoing process, with the guitarists or one of the other members coming along with ideas to the rehearsals), and settled themselves at Hasselt's The Blackroom studio where, aided by engineer Xtof B, they recorded 12 new songs which were subsequently mixed by one Bart Torfs at Bandwitch. To ensure themselves of the best sound possible on the CD, the guys then hired the renowned German Uwe Teichert to master the material, and I'm certain it was not just his involvement in the project which caused the end product to be a lot harder and rougher than the band's debut album (so the band states in the info sheet). I mean, there's sure some more intense elements that's been added to the material, like some Thrash in “Love In The Moshpit”, and overall, I would say the sound of the album greatly benefits from an addition of a fair portion of progressive elements. And although the generally more melodic side of “Rock” can still be seen as the basis of the songs, one finds some spicing up toward a more (Progressive) Metal-geared sound too. The album contains 11 nice songs (some of which with socially aware lyrics...such as the album opening “Zusammen”), and one attempt at an addition to the Guinness Book Of Records with the album title track, which lasts exactly one second (and should therefore beat the standing record of Napalm Death's “You Suffer” (which is exactly 0.316 seconds longer).

Prior to the album's release, the band sent out a music video for the album's closing track “Hallelujahland” on YouTube. On top of then current events, the clip got hit over 15,000 times within a very short time, adding a new success to the band's band history. To celebrate that (and to promote their new album, evidently), the band had a free concert at Hasselt's Muziek-O-Droom venue (a venue with some class, after all) on December 12th of last year. Check (www.) civiliantheband.be or (www.) facebook.com/Civilianpage for any music (or music clips) posted. As the band is eager to play live as much as possible, they have since been looking forward to playing more places. Concert organizers should contact Mark van Luyk either by phone (0477/222428) or by mail (mailtocivilian @ gmail.com).