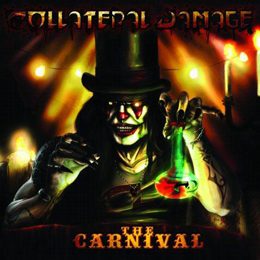 Collateral Damage is an Italian rock band that was formed somewhere in 2004 by guitarist Alex Damage, drummer Slam Cage and guitarist Blade. The band found his official line up in 2006 when Matt took on vocals duty and Steve came to play the bass. They recorded and self produced their first demo disc in 2008 which contained three songs. The sound of the band is similar to 80’s hard rock like Wasp, Def Leppard or Motley Crue.

In 2009 under the guide of Skizzo, Collateral Damage started to recorded their first (self titled) Studio Album. It got some attention so a new record wasn’t that far away. And since last month you can get their latest album entitled “The Carnival”. On this record the band shows that they are good and solid rock band that combines heavy metal and hard rock influences to create a fresh sounds with influences from the past.

But I have to say that the further the album progresses I did loose some interest in the songs. They aren’t bad songs, but they just aren’t as good as the first half of the record.