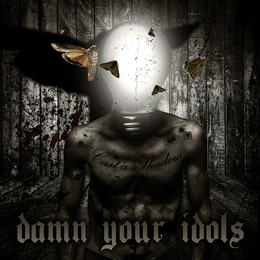 Aha...the return of a Belgian band which, in 2008, brought great expectations by releasing its self-titled debut full-length through the Apache Productions imprint, and then went on to play at the prestigious Graspop Metal Meeting festival, prior to suddenly splitting in 2009, and thus effectively crushing any anticipations of putting our country on the global Metal maps (and charts) with a band which could cut the chops!

Ah well, you know, main characters behind the band are singer Gunther Uyttrehoeven and guitarist Hans De Bruck, who'd been working together or several years under the Massif monicker, a band which released its Grooveyard album in 2001 throughout Europe with quite some success: rave reviews in national and international music press were followed with heavy rotation of the band's music, and led to the band opening the 2002 Graspop festival. But all was not well within the band, and the rhythm section eventually fled for safer environments. Uytterhoeven and De Bruck however persevered, enlisted a new rhythm section, still played a series of shows under their former name, and then changed it to Damn Your Idols, monicker under which they released their eponymous 2008 album, which amazingly got a rather good review from colleague Ivan (he's actually into the more "extreme" sorts of Metal, really – find his review in the "Archives" section, posted 17/09/2008). For reasons undivulged, De Bruck then relocated to Norway (where he still lives to date!). To my knowledge, then-bassist Bart De Roeck discontinued his musical career, and Uytterhoeven along with then-drummer Stef Sinhave went on to form Saint Agatha, a venture which however did not last, and Sinhave then found himself also playing with Sons Of Jonathas.

In early 2013 however, Uytterhoeven and De Bruck decide to add another piece to their joint musical career, and soon after they record four new songs with bassist Jesse Massant and drummer John Van Tongelen, the EP eventually being released in May of 2014. Meanwhile, the band apparently bonded, as this line-up is mentioned to plan gigs in Belgium, Norway and Sweden (no idea whether that already got underway, as on the band's official website (www.) facebook.com/damnyouridols, I've found no proof to that effect! What IS to be found there, however, is a link to the EP's Bandcamp page, which is where you'll have to go if you wanna get a whiff of what the band's music sounds like today. Going on how colleague Ivan described it, there's not much change, or rather, this is a continuation of what was: groove-driven Hard Rock with Metal infusion and elements of Thrash and Doom, reminiscing in parts of Soundgarden, Alice In Chains, etc, etc... (check colleague's review). What bugs me though, is the heady type of vocals Uytterhoeven gets in most of the time! Quite frankly, to me it sounds a bit over-the-top...but then I understand that plenty of music fans do not mind about such things, or even prefer it, so...

Judge for yourselves, will you? My rating is, obviously, a reflection of my appreciation for the catchiness of the songs, and the professional way in which they are performed!