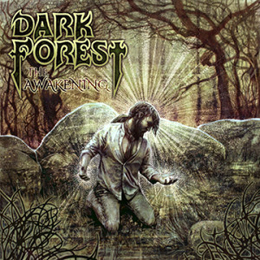 Dark Forest are a UK quintet, who present us on “The awakening” a slab of traditional  heavy metal. With  tradional I mean  that the songwriting skills of the  band are very much influenced  by Iron maiden  post  “Powerslave”  with  some  Helloween   of   "The keepers“ era.   Every song - besides opener & title track “The awakening" which is just boring so skip it if you plan to pre-listen - displays  skilled musicianship and both guitarists seem to be very much top of their league, it being  on the twin leads, it being when they go at it against each other. Dare I say that next to Murray/ Smith or Tipton/Downing  the UK can now be proud of  Horton/ Jenkings….  So far for the positive news ….. It’s  a pitty that the vocals  are not of the same  level,  singer Josh Winnard  unfortunately is not in the league  of Bruce Dickinson or even more Michael Kiske of Helloween  fame….. mind you  he is not singing out of tune nothing like that, but it seems he is lacking the power that the named examples do have, resulting all to often in a to monotone  approach  of his vocal duties, in some cases it almost seems like he is holding back iso. of going ball’s out… Maybe it’s just a question of getting more miles on  his vocal chords,  I give him the benefit of the doubt. Overall an enjoyable release due to the shredding skills of  Horton / Jenkings…..