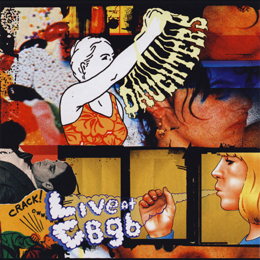 This Providence, Rhode Island based band is was, or rather, is once again...one of the somewhat aberrant acts in the New England Hardcore and Noise scenes from the latter decade. Intro sounding a bit weird? Well, that's in character with the band's music and vocal approach then!

Hahah...you see, originally the band was formed in 2001, after the demise of Providence based Hardcore act As The Sun Sets. With Alexis S.F. Marshall and Jon Syverson (both of ATSS) as permanent members, the band went through some line-up changes until the joining of Samuel Moorehouse Walker and guitarist Nicholas Sadler. When the latter left some time prior to the release of the band's self-titled third full-length studio album (through Hydra Head), the situation of the band became uncertain. No touring was done for the album, and Sadler moved on to become a member of Fang Island. In 2012 then, Marshall formed Fucking Invincible. However, the band reformed in its last line-up for a one-off show in Rhode Island on September 13, 2013...and due to popular demand a second show was played two days later. Since then, the band's facebook page showed heavy activity, and although no official statement was made about an actual reformation of the band, the guys have played several shows, with more planned for 2014.

During their “first lifetime”, the band had 4 releases on different labels, starting with 2002's self-titled 4-track EP. Both that, and the Live From CBGB (sound familiar?) which was released in 2004, were issued through City Of Hell. In between (2003), the band released their debut full-length Canada Songs through the famed Robotic Empire label. In 2006 the band not only contributed a cover of The Birthday Party's “Marry Me (Lie Lie)” to the Three One G compilation album, but also a sophomore studio album entitled Hell Songs (again on Hydra Head)...and prior to the release of the sophomore album Hydra Head also released the EP The First Supper. The band toured with acts such as The Locust, Russian Circles, Young Widows, and The Chinese Stars.

So, in essence this ain't even a new album by Daughters (except for having already been released as a separate live album, the material was also added as bonus material to the Japanese release of 2006's Hell Songs under the title Live At CBGB's, Stupid), but merely a rehash of what already was. But it's a good showcase of what the band stands for anyway: seemingly chaotic yet definitely structured, loud 'n' noisy guitar work, with drums and bass pummeling along in frantic mode, and on top Marshall screaming at the top of his voice. To get a whiff of the band's weird antics, it's already enough to look at the song titles, such as there are “Hello Assholes”, “Boner X-Ray”, Nurse Would You Please Prep The Patient For Sexual Doctor”, “A Room full Of Hard-Ons  And Nowhere To Sit Down”, or “Damn These Bloodsuckers And Their Good Qualities”. Needless to say, the songs are relatively short: between 65 seconds and 2:43, with an average of 102 seconds per song on the live album...and that includes song introductions and in-between banter, don't you know (in other words, the 12 songs last a mere 20:21)!

For your audio introduction to the band, surf to (http://) daughters.bandcamp.com, where you can listen to the complete 2002 EP and the band's debut album! But be warned, it takes a pretty wacked-up mind to like this kind of stuff. Obviously, there's enough such persons out there (the guys at Hydra Head to start with, or they wouldn't 've given the band the time of day)...yours truly including! Great stuff, this...and now for an album's worth of new material, eh?