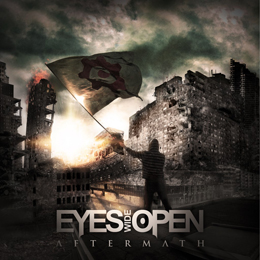 Eyes Wide Open is a Swedish metal band. Since their beginnings in Karlstad back in 2011, the band has more than just made themselves a name.

In less than two years, they have gathered a huge following and 15 fanclubs over the world (witch certainly isn’t bad), and played two of Sweden’s largest rock/metal -festivals, toured throughout Sweden, Denmark and Norway, gotten alot of airtime on alternative radio channels all over the planet, achieved no less than 60.000 followers on Facebook and much, much more. Now I must say that how much I enjoyed this record, I could only think of 1 thing. “In Flames”. This band reminds me of them in every way. Riffs, style, lyrics….you name it. But I have to say that although it could be an In Flames record, it doesn’t feel like it’s a copy band.

It is what it is and either you could do nothing but complain, or just enjoy a good record.