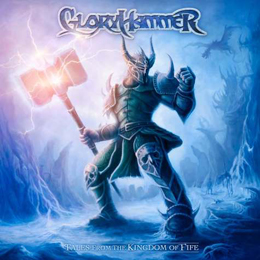 Gloryhammer is, so to speak, the brainchild of Christopher Bowes, mastermind of Alestorm.  But mind you, this album has no similarities to what he does with Alestorm. He wrote the music for this album, and played the keyboards on it.  For the vocals he enlisted the aid of Thomas Winkler (Emerald), who did a great job.

If you’re a fan of epic heavy metal à la Rhapsody, then this is an album that should join the Rhapsody albums on your record shelf.  It’s epic metal from start to finish.

The album is a concept album, that tells us a story about medieval Scotland, and since it’s epic metal it’s quite obvious it goes about magic, sorcery, dragons, battles etc.  Musically you get what is usual in this type of music,  lots of keyboards, fast, frenzied guitars, and battering drums.  But whereas in the beginning I was a real Rhapsody fan, their latest albums, although not being bad, drew less of my attention because it gets mealy after a while, this album was able to maintain my attention, by being less mealy.

This is the type of band you should see after a couple of beers, and sing along with their anthems, while consuming another six-pack.