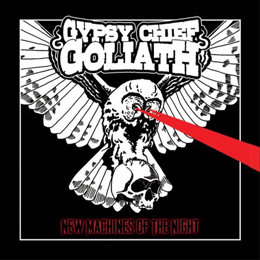 No doubt about it: Gypsy Chief Goliath would stand proudly in a book gathering the wackiest bandnames in Rock history! Foremost however, I feel the band's already earned its place in the regular history books of music as well!

Founded in 2009 as a three-way guitar band with the intent of coming across as (in their own words, taken from the band's facebook page) “Thin Lizzy meets Black Sabbath, with little elements of modern Heavy Metal here and there...” (the statement continues with “...we are a Heavy Blues band, that wavers on the edge of Metal, Stoner, Doom, and Classic Rock...all our influences combined make up this band of gypsies”), the band was originally a 6-piece consisting of lead singer/ guitarist AL “The Yeti” Bones (known already from The Mighty Nimbus, Georgian Skull, and  Mister Bones), guitarists “Gypsy” Dave Ljubanovich (whom has a history with the band Blood Runs Cold) and Sean Hamilton, bassist Sean De Faria, and drummer Adam Saitti, with mouth harmonica player Brodie Stevenson occasionally stressing the band's Blues influences some more.

In 2011 GCG released a first album entitled It's A Walk In The Mist (issued through Black Vulture Records, and available by pay-for-download at iTunes  - mind you, the “album” may have been a “mere” demo, and the “label” their own...I failed to find confirmation), with which they charted on the iTunes Canada Blues Charts at #15 (just under Big Sugar and just above Blues legend BB King, for their song “Black Samurai”).  Meanwhile, The Yeti and Gypsy Dave have found out that they didn't really need a third guitarist (whom decamped along the way), as long as they kept busy enough, and De Faria was exchanged for new bassist Darren Smith. Mind you, I have no idea where in the time-line of the band's career these line-up changes actually occurred. Whatever, since the band's conception, whatever constellation of GCG was at hand has already played support slots with the likes of Cancer Bats, Blood Ceremony, Sons Of Otis, Bison BC, Barn Burner, Fiftywatthead and White Cowbell Oklahoma (among others)...not exactly the smaller acts in the genre, and it was therefore inevitable that the band would eventually attract the attention of a serious label. It kinda seems weird to me that (to my knowledge, at least) no Canadian labels did an offer, but the band was but too happy to go into business with Pitch Black from Europe!

For the recordings of their new 10-track album, the band relied completely on analog recordings, done at Windsor (Ontario) based Sharktand Studios by engineer/ producer Mark Plancke, and the subsequent mastering was also done on all vintage out-board gear. Which doesn't mean that the album has an outdated sound by any means! Quite on the contrary, you'll swear to never having heard a more explosive sound! What with both the deep end (bass & drums) of the music coming out as clear as the twin guitars, one will easily find oneself listening to both end of the music at the same time, moving lower body parts along the bass lines, while shaking one's head along the somewhat more complex melodies guitar melodies, or the suddenly thrown-in mouth harmonica. Mind you, when I mentioned those “more complex guitar melodies” just now, I really meant the guitars for the most part play nicely intertwining tunes, which the more seasoned listener might appreciate (certainly in conjunction of the rest of the band's music), as well as those music fans who are into more catchy melodies. Because here's one thing about GCG: the band's music is catchy as *** (fill in whatever strongest word of your own vocabulary you might find appropriate, providing to think as positive as can be!), and to me personally, it's no surprise that the album already made it to N°4 in the “Album Of The Week” voting poll of Revolver Magazine's October 8 issue, or that the album opening track “Uneasy Kings” made it to #35 in the radio charts at PureGrainAudio.com! You see, on top of the qualities stated above, the band also has a truly exceptional singer in The Yeti. For the most part displaying a type of gruff voice you haven't heard anywhere before, he occasionally (just slight passages, mind you) goes a tad more soulful, and the combination sure stands out!

For a bit of live footage video, check the band's “Bio” section on their own (http://) gypsychiefgoliath.com, and for some studio audio (including the aforementioned  “Uneasy Kings” and two older songs) look up the “Music” section at (www.) facebook.com/GypsyChiefGoliath. If what's available there don't win you over for these guys, I seriously don't know what would, short of seeing them on a stage! Oh, on the same site (“Videos” section), you'll find even more videos than on the band's own site! Meanwhile...I've again been listening to the albums a couple of times since starting the review, see (doin' other personal stuff on the side at the same time)...I don't know why I won't nominate New Machines... for inclusion in my 2013 year-lists!