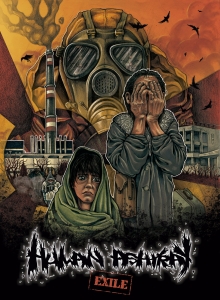 Despite more than a decade of existence, Catalonian act (I dare not to mention ‘Spanish act’ anymore) Human Ashtray have a very selected biography, with one release in 2007 and one in 2012. That’s it, until now. As a four-piece, these guys now return with Exile, a seven-song album that lasts for about twenty-eight minutes. The material was recorded, mixed and mastered at the Trempol Studio with guitarist Xevi Alegre behind the desk.

The album starts with a quite intriguing intro, called RBMK-1000; first a war-scene, with gun fire and screams, then some noise, and then a heartbeat with a spoken voice telling about the beat of a heart, comparing that from a living person and that from a dying one. Unusual yet attractive it is.

But then, as from The Last Lines Of Exile, Human Ashtray show their ugliest face! What these guys bring is a mostly violent and vengeful form of somewhat melodious yet quite harsh Grind-edged Brutal Death Metal / Deathcore. What strikes me as from the very first moments are the huge technical skills, going for both song writing and performance. When it comes to the first, the technical side of the composition writing, it has to do with several aspects. First of all the listener gets overpowered by quite some diversity, in tempo and play. Most of the time, the tempo is totally speed-up, fast and raging, even blasting and merciless. Yet there are quite some breaks involved, once in a while turning into slower, mid-tempo passages. It gets translated through the players’ skills too: rapid drum salvos and hammering bass lines go hand in hand with crafted and melodic guitar leads, interrupted by warlike artillery rhythms and fast-forward beats. On top of it, the main vocals are like spawned by a wild boar being raped by an ill-disposed mammoth. …or something like that… Besides, you have the known additional vocal types: guttural throat sadism and punishing screams from the Underworlds.

The sound quality is about the perfection for this kind of slamming and smashing aural pleasure: clean in the mix, rough in the performance. The first makes the listener focus on the individual craftsmanship of the members; the second, the roughness, characterises the brutality of the atmosphere.

Without hesitant, Human Ashtray can be labelled within the scene that also includes acts from Aborted over Defleshed and Human Mincer to The Black Dahlia Murder and Psycroptic, with even some hints of Swedish experience. That does not sound bad, does it?! Beware: if you’re looking for something renewing or something totally original and progressive, then you better skip this recording. But if you can appreciate honest, right-in-the-face Deathcore / Grindeath, then you’ll have a nice contender for your (insignificant) end year’s list for sure.