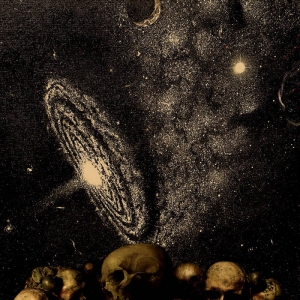 On February 10th 2014 I wrote and uploaded a review for Novit Enim Dominus Qui Sunt Eius, a monster of an album by U.K.-based act Abyssal (Iron Bonehead Productions). Abyssal are a solo-outfit by a guy who calls himself G.D.C., and this person recently started another solo-project, called Inculcator. As Inculcator, G.D.C. did release a first recording in February 2016 via the digital canals, though there might have been an older recording, Voces Mysticae (?) – it has been re-recorded for this release,  by the way. Three months after the digital appearance, the young yet strongly growing American Underground label Caligari Records (watch out for them, because I foresee a fabulous future!) decided to release that material on tape edition, being limited to an edition of 150 copies.

With Void Abecedary, Inculcator bring purest old styled Thrash anno the Eighties, fast and fierce, Teutonic and blackened, deadly and merciless. What one might appreciate is the universal approach, actually. I did mention ‘Teutonic’, but as a matter of fact, this stuff reaches the old school tradition from all over our sick globe. There’s some Possessed, Venom, Discharge, Sabbat, Destruction, Nuclear Assault, Onslaught and Dark Angel going on, but there’s more than that. Elements from Morbid Doom-Death Metal (I simply adore the few slow-paced excerpts, like in Liber Beelzebub or Stygian Expanse), acoustic interludes, it’s all part of the (merciless) game.

In general, however, this material is quite fast, energetic, rhythmic, guitar-driven and thrashing. Fast pieces interact with blasting assaults, fierce eruptions and high-speed explosions, getting translated within both rhythmic support (monolithic!) and lead melodies (monumental!). the guitar dominance is striking, but not exaggerated, not bothering (at all) – like a decent Old Style Thrash album needs…

I know that it isn’t but a subjective and personal addition, but I dare to say that this album, Void Abecedary, is one of the best Thrash-edged releases I’ve heard in years. Even the sound quality is quite appropriate, with a great final mix and a loud yet still nicely-balanced production.