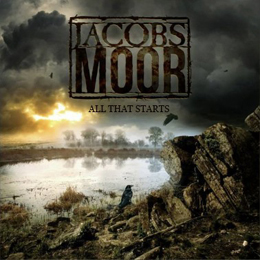 If you want to buy this CD, you have to contact the band on www.jacobsmoor.com – “Contact”, as the band still is looking for a label to release the album physically.  But is is also distributed online via iTunes, Amazon, Spotify… This Austrian band was founded by Richard Krenmaier, Johnny Sommerer and Rainer Lidauer, Krenmaier being known as the singer op power metal band Stygma IV.  The other two bandmembers play in another Austrian Metal Band Circle Of Illusion, who bring us progressive metal. What they bring us is a mix of Power Metal and Trash Metal, for my liking going a bit too much in the direction of Trash Metal, but that’s my personal opinion, and everybody is entitled to have another view on this.

Despite not being that big a fan of Trash Metal, I didn’t find this a bad album at all.  I’d say It sounds like a mix of music à la Iced Earth, Iron Maiden mixed with elements of Slayer, Testament.  The drumming is frantic, and many times staccato, with a double bass drum, while the singing is powerful, and moreover gruntless, which means a bonus to me;