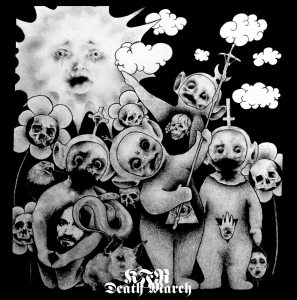 The name K.F.R (mind the lack of an additional point after the ‘r’!) comes from the Arabic word for ‘käfir’; not the fungus, but a word that means ‘disbeliever’, which was tattooed on the Antichrist’s forehead in Islam. All hail the käfir!

The project was started by painter Maxime Taccardi. In 2006 he wrote his first melodies, but nothing actually was recorded or distributed officially. However, in 2013 he decided to start this outfit, and soon he got joined by nobody else but Déhà on drums (think: We All Die (Laughing), COAG, Merda Mundi, Slow, Deos and many others). Since then many songs were written, recorded and released. Amongst those releases was the full length Death March, which was released independently on CD and digitally at the very end of 2014. Now the very young German label Manifest Of Hate Creations re-releases the material on tape, including two bonus tracks. There are only 127 hand numbered (regular) copies (there were a few others in a luxury-form too, but these ones sold out) and they’re signed with Maxime’s blood (no, it’s not a filthy stain or a smudge)! Besides, it comes with a leather cover (instead of paper or carton), all done by Maxime himself.

The ‘Music’ must be seen as the aural expression of Maxime’s visual art, the translation of paintings into sound. That is why the whole concept must be seen in its totality: lyrics and music, visuals, the whole experience.

Side A starts with Der Antichrist, opening with a short Harsh Noise thing and some Arabic chants, and soon a desolate piano melody, strange percussions and eerie screams dwell towards a completely different direction. Somewhat later harsh drones and scarifying noises, still with those grim voices, take over the travel, before returning once again to a more integer part, this time with organ-like keyboards (and the aforementioned percussions and piano – and vocals), then again, Noise, and so on. And you know, actually all this is quite natural and cohesive; not like an uninspired amalgam of ideas that do not make sense. Quite comparable contradictions / cohesions are done on the following part of this release. The Devil Has Come Home, for example, shines and shivers with its weird, mostly haunting samples, the electronic structures, and quite an unusual scala on vocal participations.

There is for sure a basement created around electronic beats and blackened sounds, putting inspiration out of Necro-Noise (I know, it didn’t exist, until now), Funeral Industrial (idem ditto, but who are you to gainsay?!), Black-Drone-Ambient (another neologism that became reality as from now on) and Wave-Electro-mysticism (in case this does exist; as from now on, it does). There are even hints of Martial Music, like on the title track (which also includes purely psychotropically frenzy passages) – especially the Epilogue-piece (I’m sure the inspiration must have been very emotive and personal!), of minimal nihilism, and of maximal nihilism too (like both of those definitions being described in a track like the new epic Welcome My Son).

In contradiction to all other pieces, the new outro Funeral II is a piece of floating Ambient with a dreamlike atmosphere, standing far away from the hallucinatory and eccentric electronic structures of the other compositions. I like this kind of material for sure, but it’s a strange thing in order to find back on a release like this one.

If you take the malignancy of Necrosadik, the esoteric and ritual obscurity of Sui Generis Umbra, the intolerable weirdness of Negligee, the trippy effect of Haiku Funeral and the most uncomfortable moments of Iron Fist Of The Sun all at once, then … This is the aural expression of a post-modernistic and surreal visualisation of both creativity and madness. Please be welcomed!