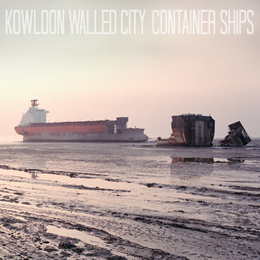 I wonder if there is something like brutal panda bears, but according to Brutal Panda Records, this is a perfectly plausible combination. They released the first record of the San Francisco based band Kowloon Walled City. The band's name refers to the walled city of Kowloon in Hong Kong, a refugee where mobs, prostitutes, criminals and all other sorts of outcasts hided from the government. The walls have already been broken down, but with Container Ships, Kowloon Walled City makes a fine attempt to rebuild these walls.
For their new record, they recorded seven new songs in which you mostly hear sludge metal, but also post hardcore and indie rock is represented. The music and lyrics are very dark and really create of feeling of despair.

Kowloon Walled City definitely is a band to watch in the sludge genre!