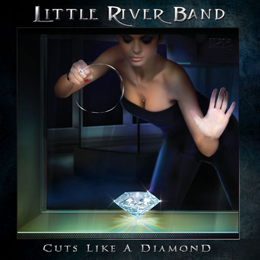 Cuts Like A Diamond Track Listing: The Lost And The Lonely; Forever You Forever Me; Cuts Like A Diamond; You Dream I'll Drive; I'm An Island; Way Too Good; What If You're Wrong; Where Do I Run, Someone; Who Speaks For Me; Love Is.

Cuts Like A Diamond is a multi-faceted gem that shines brightly throughout!

Many bands of the classic rock era go through lineup changes and reconfigurations. As groups age and time goes by this is just a fact of life - like it or not. The Little River Band has not been immune to this process. For the past 30 years singer and bass guitarist Wayne Nelson has carried the mantle of LRB to move the band and the brand forward to the present day. The existence of the current version of the Little River Band has been met with delight by many and derision by others.

Still, when Frontiers Records came calling with a request for a platter full of 80's era style Little River Band music Wayne and company were up to the task. They recently delivered the often glistening and engaging Cuts Like A Diamond as the next entry in their captivating catalogue of music.

For the first album of new material in over a decade the band dug up some of the finest songs the world had to offer in addition to crafting some precious material of their own. The album opens with the signature The Lost And The Lonely - a tribute to the men and woman in the armed forces - with all the elements of classic LRB right there on the frontlines. Powerful lush harmonies along with layered instrumentation indicate that the band is fired up and ready to battle on this release.

"Forever You Forever Me" is another track sparkling with wild intensity. The mid-tempo music and verses build up to a captivating chorus of funk-infused harmonies making for a song that has a nice ring to it. The polished title track opens with a melodic hook while offering clarity through the lyrics on how to deal with the rough and blemished human specimens to reveal their beauty inside.

"You Dream I'll Drive" is powered by a motoring and rhythmic pacing that accelerates on a full tank of harmonies and musical accompaniment making this another classic car song that evokes freedom and the spirit of adventure. "I'm An Island" shakes up an old cliché and finds the singer seeking solitude after a broken relationship. Still, he can't get away from the memories - and the memorable chorus is hard to avoid, too.

The Nelson-penned "Who Speaks For Me" digs a little deeper as he tackles a subject close to his heart. Wayne puts the spotlight on child abuse in the same way "Luka" and "Hell Is For Children" did in the eighties which is sad to think we haven't evolved past this troubling social problem. The track opens with a dark pulse and an angry tone that tells the story of the abused through the child's eyes.

With repeated listens it's clear that Cuts Like A Diamond is a marvelous multi-faceted release punctuated by hard rock and cool gems. Sure, the detractors might call it cubic zirconia but there's enough hope in this diamond that it is sure to etch itself into the hearts and minds of the Little River Band fanbase around the world.