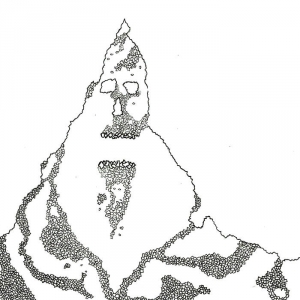 Arthur Arsenne aka A.Arthur is a ‘famous’ musician within the Drone / Ambient / Experimental / Improvisional scene, as well as the owner of Death Carnival Records and the new label Arsenic Solaris. For both labels I did some reviews lately, as well for some of A.Arthur’s projects, such as L_Arsenne, Arsenne + Cisak + Oleksinski or Lands Of Conifer.

This last one, Lands Of Conifer, appeared on a split collaboration with Aun, called AUN With LOC. The review was uploaded on March 13th 2016, by the way. Lands Of Conifer are part as well of a split with Mitantecuntri, a duo that also involves A.Arthur. It got released in an edition extremely limited to 49 copies only, but the reason to purchase this stuff might be the artwork / layout alone. Actually, this tape does not come in a regular hard-plastic box, but in a paper bag (sealed!) with a simple, quite bizarre drawing. Original, cool! Everything was mixed and mastered by Mr. Arsenne, and this guy took care of the artwork too.

The A-side offers us an untitled track by Mitantecuntri, a project that consists of A.Arthur (guitars, loops & fuzz microphone) and L. Benjamin (guitars, vocals, faulty jack). It’s quite a lengthy piece (twelve minutes) that was recorded in September 2013 live at The White Room. The piece starts quite integer, with industrial loops and soft drones, but soon shamanistic voices, harsh guitar riffs and eclectic effects take over the game. It’s like a tribal ritual revised through a psychedelic channel of post-modern abilities to express a sonic exploration of dimensions not yet visited. There are several chapters within Untitled, which are very cohesive, yet each time with another (improvised?) identity. Despite the noisy-experimental approach, however, there is no exaggerated absurdity at all; on the contrary, the whole aural journey remains in between borders of admissibility.

Side B brings two pieces by Lands Of Conifer, which were recorded at The White Room too by label owner A.Arthur (guitar / bass / loop / effects / vocals / drum computer). You Enter In A Shadow Zone is a shorter piece (2:44), based on a quite creepy and horrific noisy melody, which gets joined by nihilistic and mesmerizing synth lines at the back ground. The second track, Obsolete Kingdom, clocks over ten minutes, and it opens with some ethereal semi-acoustic guitar pickings, the psilocybin way. After a couple of minutes, the experience evolves into a minimal-industrial and electronic, mostly eclectic and pseudo-chaotic Ambient / Drone piece, building up towards quite obscure, even asphyxiating heights. The evolution goes further towards an aural orgasm of sub-mechanical yet highly transcendental beseeching and bewitching.

Both projects come up with quite comparable material, and in both cases the Drone / Ambient scene gets enriched by this material. No matter if you’re a ‘fan’ of material by same-minded colleagues such as Piotr Cisak, Dirk Serries, Aidan Baker or the likes; you will (have to) adore this!