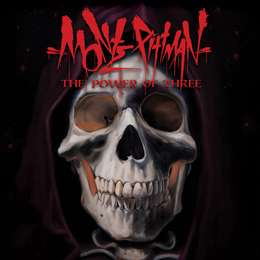 Monte Pittman born in Longview, Texas, US. Who has played and written with Madonna, Prong and others…Received in 2012 The music award of best solo artist and was, nominated for Best Rock Artist, Best Blues and Album of the year. A chameleon in the music branch, played with the greatest in the world. Also playing on the album: Kane Ritchotte (drums), and Max Whipple (bass).

“The Power Of Three” his third solo album. As opener “A Dark Horse” start acoustic but then song burst with some incredible riffs what what a sound. “Delusions of Grandeur” same shit great drums and riffs. But then “Everything’s Undone” you can hear some poppy influence in the chorus it is to clean and to gentle. But again the guitar riffs sound crazy. While listening to this cd my feet were tapping from the beginning till the end. But the poppy sound appears now and then. Note: Production is made by Flemming Rasmusser the producer of Metallica’s “Master of Puppets”. And so on. I can recommend this album to explore the different mix of influences.